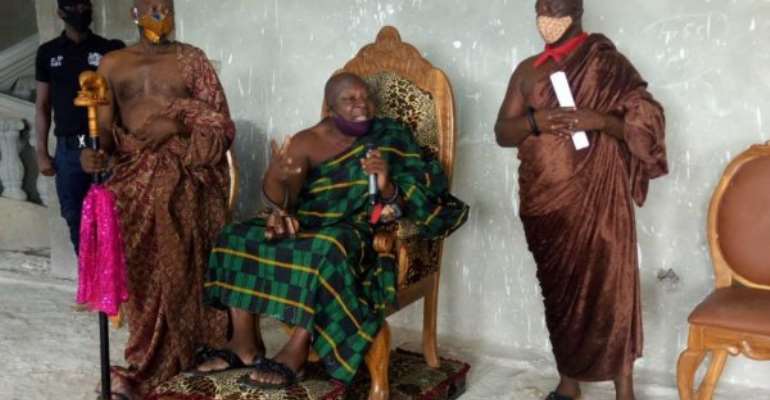 Torgbuiga Adzongaga Amenya Fiti V, Paramount Chief of Aflao Traditional Area, has said the recent reaction by the chiefs to the military deployment to Aflao had no intention to discredit government.

He said as chiefs of the area, they could not look on unconcerned when their citizens complained of rough treatment by security personnel deployed to the area in a difficult time like the COVID-19 period.

Torgbuiga Fiti said this when a government delegation, led by Reverend Johnson Avuletey, the Deputy Volta Regional Minister, called on the Aflao Traditional Council to resolve the seeming impasse between Aflao chiefs and the Government over developments arising from military deployment to the area.

He said the Council had always been supportive of government's directives on COVID-19 prevention and that their press briefing only sought to question the deployment of soldiers to the Region at a time when the livelihoods of the people suffered a jolt due to the border closure.

"The Aflao Traditional Council, together with all the security agencies within Ketu South Municipality, supported the Government in its implementation of the protocols to prevent the spread of COVID-19 and the records are there to prove that its Security Council (MUSEC) is on top of security in the Municipality."

"There's restriction on movement of people across Ghana's borders but not on goods and services but people who come to pick their pre-ordered goods, mostly vegetables from Togo at the Ghana side of the border, face harassment from the armed men. I'm not against government enforcing the law but what I need is that ordinary citizens must be protected," the Paramount Chief said.

Rev Avuletey asked the chiefs to take heart while the concerns were investigated disclosing that the Regional Coordinating Council took advice from stakeholders including the Volta Caucus in Parliament on April 14 to consider sending troops to help Immigration officers properly guard the several unapproved routes to stem illegal activities.

Mr Pius Enam Hadzide, the Deputy Minister of Information, said the military deployment was done nationwide and not just Ketu South or Volta Region and that their mission was to help enforce the border closure.

He said it was a mere coincidence that the recent deployment happened at a time the voter registration exercise was about to commence and appealed to the people not to read meanings into it.

Mr Kofi Dzamesi, the Minister of Chieftaincy and Religious Affairs, said the military officers would remain at post as long as the border closure remained in force to prevent further spread of the virus.

He gave the assurance that any officer found to have acted irresponsibly would be dealt with.