By Patrick Fort and Aly Ouattara 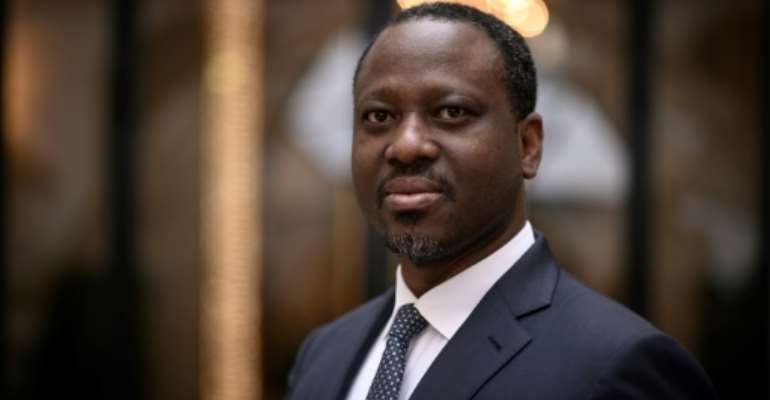 Guillaume Soro was an ally of President Alassane Ouattara, whom he helped to power during the post-electoral crisis in 2010. By Lionel BONAVENTURE (AFP/File)

Guillaume Soro, a former rebel leader and candidate in Ivory Coast's October presidential election, has been forced into self-imposed exile in France in the face of a long list of legal problems.

But in his stronghold of Ferkessedougou, a commercial hub in the north, he has the unwavering support of backers who believe he is destined to lead the west African country.

"I don't do politics, but you don't abandon your child," said Kiali Ouattara, a traditional chief.

Soro was a leader in a 2002 revolt that sliced the former French colony into the rebel-held north and the government-controlled south and triggered years of unrest.

He was an ally of President Alassane Ouattara, helping him to power during a post-election crisis in 2010 that claimed several thousand lives.

The charges and accusations against Soro have not discouraged his supporters in Ferkessedougou. By Issouf SANOGO (AFP/File)

Soro went on to serve as prime minister under Ouattara and then parliamentary speaker.

But the two eventually fell out and Soro began to harbour his own presidential ambitions, parting ways with the ruling RHDP party last year. That's when his fortunes turned.

in April, Soro was sentenced in absentia to 20 years in prison after he was convicted of embezzling public funds. He also faces charges of plotting an anti-government uprising.

As a result, he abandoned an attempt to return to the country in December. Many of his supporters, who have dismissed the charges as politically motivated, have been jailed.

Soro is also the subject of a complaint filed in Paris on the grounds of torture, murder and war crimes between 2004 and 2011.

Soro has insisted that the accusations are designed to keep him out of the presidential race, which has been seen as a test of stability for Ivory Coast, the world's largest cocoa producer.

None of the charges or accusations have discouraged his supporters in Ferke, the common name for this city of 160,000 people 80 kilometres (50 miles) from the village of Diawala where Soro was born.

"The RHDP puts (Soro's) supporters in prison and sentences him with far-fetched verdicts," said Ouattara Laragton, a 55-year-old hairdresser -- a reference to what happened to Ouattara under former presidents Henri Konan Bedie and Laurent Gbagbo.

Kiali Ouattara, a traditional chief in Ferkessedougou, is among Soro's supporters. By Issouf SANOGO (AFP/File)

Some say they would like to see Soro, 48, bring a more modern approach to the post held by 78-year-old Ouattara.

"I know that if the kid shows up, he's going to win," Laragton said.

Sitting at a major crossroad with direct routes to border crossings into Mali and Burkina Faso, Ferke supplanted the nearby historic city of Kong -- the stronghold of the Ouattara family -- as the north's commercial centre in the 20th century thanks to the passage of a regional railway.

Just 50 km west of Ferke is Korhogo, the capital of the north and the city of Prime Minister Amadou Gon Coulibaly, the RHDP candidate chosen by Ouattara to succeed him.

Soro had long hoped that Ouattara would nominate him as his successor.

"They threw him under a bus after he devoted himself to getting them in power," he said. "There are many of us in Ivory Coast who are silent supporters of him."

'It was Soro who left'

But the RHDP is far from having lost its grip in the city.

As soon as he came to power, President Ouattara invested in the predominantly Muslim north of the country, which had long been neglected by the political power coming from the south.

Ferke, like Korhogo, has benefited greatly from the money that has been poured into schools, mains electricity and roads.

"(Soro) is in too much of a hurry to take power. He has to continue his apprenticeship, to learn alongside" the president, said Ismael Ouattara, an electrical appliance salesman.

The mayor of Ferkessedougou, Kaweli Ouattara, said he believed Soro would come back to Ivory Coast. By Issouf SANOGO (AFP/File)

Soro "can't say that this is his stronghold", said Tilkouete Sansan Dah, a member of parliament for the nearby town Bouna. "Soro would be unable to be elected MP for Ferke today."

The RHDP has worked to chip away at his support.

"The RHDP was like a house made up of different rooms. There was the pro-Soro room, the pro-Gon Coulibaly, the pro-Hamed Bakayoko (defence minister)," among others, said Sansan Dah.

"The activists did not change houses. It was Soro who left the house."

‘Sputnik-V procurement contract must be re-examined’ – Kwaku...
45 minutes ago

Getting Sputnik-V vaccines from black market using middlemen...
45 minutes ago