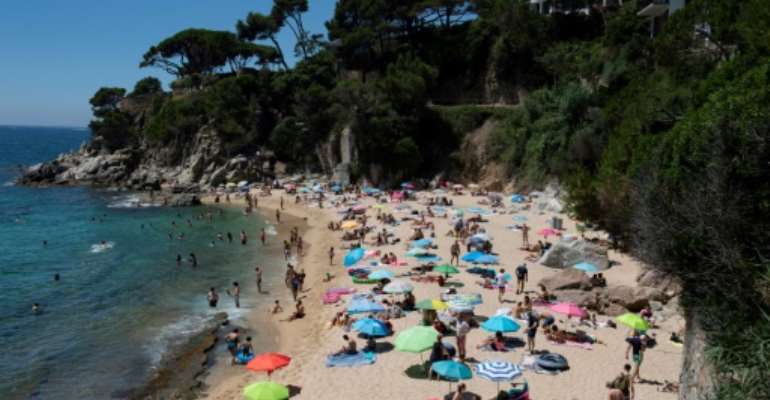 People enjoy a day out at the beach in Platja D'Aro near Girona -- Spaniards endured one of the world's toughest lockdowns for three months from March 2020. By Josep LAGO (AFP)

Officials at the epicenter of the worsening coronavirus crisis in the United States warned Sunday their hospitals were in danger of being overwhelmed by the upsurge, as India registered a record number of new cases.

The US has struggled to respond to the devastation wrought by the virus, with its national death toll rising to near 130,000 out of 2.8 million confirmed cases, and many states hit by increasing infections after lockdowns were eased.

Hospital beds are full in parts of Texas, while calls for fresh stay-at-home orders are growing. Some mayors say their cities reopened too early, as President Donald Trump tries to downplay the disease that has gripped much of the country.

India faces similar challenges as it clocked a record daily number of cases across a vast nation where medical facilities are uneven and many COVID-19 infections are likely to be undiagnosed.

In signs of progress, Formula One returned on Sunday with the season-opening Austrian Grand Prix held behind closed doors, while the Louvre museum in Paris will reopen on Monday after a 16-week virus shutdown.

The pandemic has killed at least 531,789 people worldwide since it surfaced in China late last year, according to an AFP tally on Sunday based on official sources.

More than 11 million people have been infected in 196 countries and territories.

After the United States, Brazil is the hardest-hit country with 64,265 deaths, followed by Britain, Italy and Mexico.

A health worker carries swabs taken from passengers of an Iberia flight to be tested on arrival at Carrasco International Airport, Uruguay. By Pablo PORCIUNCULA (AFP)

The US' annual July 4 holiday weekend was overshadowed by growing evidence that its fractured response has exacted a heavy price across the south and west, after previous hotspots such as New York emerged from the worst of the virus.

"Our hospitals here in Harris County, Houston, and 33 other cities... they're into surge capacities. So their operational beds are taken up," said Lina Hidalgo, chief executive of Harris County, which includes Houston, Texas.

"Restaurants are still open. Indoor events can take place no matter the size," she told the ABC TV channel. "What we need right now is to do what works, which is a stay-home order."

Steve Adler, the mayor of Austin, Texas, also expressed concern that the healthcare system could buckle as the disease spreads rapidly.

World map showing official number of coronavirus deaths per country, as of July 5, 2020 at 1900 GMT. By Simon MALFATTO (AFP)

"If we don't change the trajectory, then I am within two weeks of having our hospitals overrun. And in our ICUs, I could be 10 days away from that," he told CNN.

Phoenix city mayor Kate Gallego said, "We opened way too early in Arizona" state. She suggested that a new stay-at-home order should be issued.

One high-profile victim of the global shutdown -- the Taj Mahal -- will remain closed, it was announced Sunday as India reported 25,000 cases and 613 deaths in 24 hours -- the biggest daily spike since the first case was detected in late January.

In the capital New Delhi, medical staff started treating patients at a spiritual center converted into an isolation facility and hospital with 10,000 beds, many made of cardboard and chemically coated to make them waterproof.

Hundred of racing fans watch the Austrian Formula One Grand Prix race at a drive-in cinema at the Zandvoort circuit, The Netherlands. By Robin VAN LONKHUIJSEN (ANP/AFP)

In South Africa, dozens of military medics were deployed on Sunday after a surge in infections in East Cape province.

Like India, South Africa imposed some of the strictest stay-at-home measures in the world in late March in a bid to limit the spread of COVID-19, but the number of infections is rising daily as the lockdown rules are gradually eased.

Iran announced 163 new deaths, the country's highest official one-day toll since the outbreak began, while Morocco discovered an outbreak in a fish-canning factory, with 300,000 inhabitants placed under lockdown.

Rehearsals ahead of the Sound of Resilience concert inside the Temple of Bacchus at the historic site of Baalbek in Lebanon's eastern Bekaa Valley, on July 4, 2020. By - (AFP)

England's pubs reopened after a three-month hiatus on Saturday, with police concluding that the thousands of people thronging the streets of London's Soho nightlife district made it clear "that drunk people can't/won't socially distance."

In Spain, two separate outbreaks saw 200,000 people put under lockdown in the northeastern Catalonia region and another 70,000 in the northwestern Galicia region.

Spaniards have emerged from one of the world's toughest lockdowns in which people were confined to their homes unless they could provide the police with a valid excuse.

In Lebanon, a philharmonic orchestra performed to spectator-free Roman ruins on Sunday as the Baalbek International Festival was downsized to a single concert.

A Canadian military plane headed to Latvia for a NATO mission was forced to turn around for fear that troops on board had been exposed to the virus before takeoff at a military base in Ontario where someone tested positive.