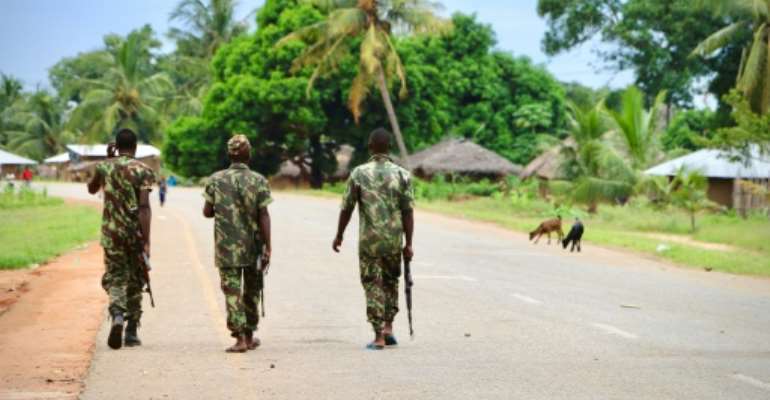 Mozambique troops have been fighting against a jihadist insurgency since 2017. By ADRIEN BARBIER (AFP)

Northern Mozambique has been hit by a jihadist insurgency since 2017 that has killed more than 1,000 people and complicated the country's plans to develop its offshore gas reserves.

But attacks on workers involved in the liquefied natural gas (LNG) project development have so far been rare.

Three of the 14 occupants in the vehicle survived and another three are still missing.

"On Saturday 27th June a vehicle belonging to Fenix Construction, a company that operates in Palma, ...was attacked by five insurgents, approximately four kilometres north of Mocimboa da Praia in Cabo Delgado (province)," the company said in a statement on Sunday.

The attack occurred around 50 kilometres from the Total LNG site in Palma.

On the same day, Islamist militants attacked and temporarily occupied the small town of Mocimboa da Praia for the second time this year, igniting a mass civilian exodus from the town.

Attacks in the region have already killed at least 1,300 people according to The Armed Conflict Location & Event Data Project (ACLED).

The United Nations estimated in May that the attacks had displaced at least 210,000 people. With the recent attacks, the number of displaced people may have reached more than 250,000, according to aid organisations working locally.

The latest Mocimboa da Praia attack was claimed by Islamic State Central African Province, a group that has already revealed its goal of establishing a caliphate in the region.

Despite the unrest in the region, Total has said it will proceed with its $23 billion gas project.