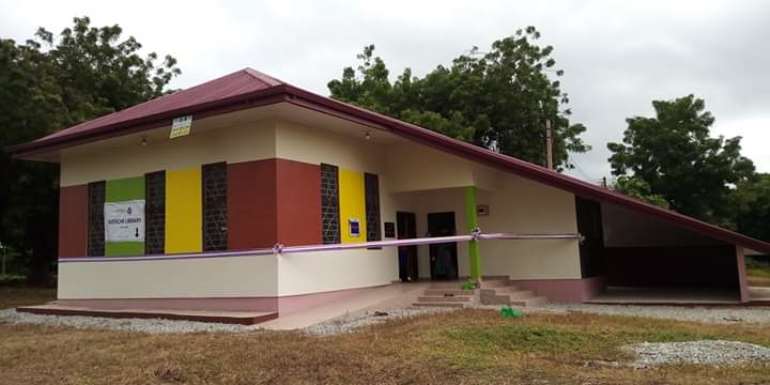 An ultra-modern library has been built and furnished with modern books and computers and other teaching and learning materials to match up with the current education trends for pupils, students, and teachers in Wenchi and its environs.

The multi-purpose edifice which has ICT Lab was constructed by the First Lady of the Republic Her Excellency Rebecca Okai-Kor Akufo-Addo, as part of her national Literacy Education Challenge Project to improve on the reading and writing skills of students.

In his address to hand over the project to Wenchi, a representative Richard Darko who led a team from the Office of the First Lady said the project was a demonstration of her commitment and passion for education and a token of her personal many life-changing initiatives under the Rebecca Foundation. He expressed appreciation to the people and the political leadership of Wenchi thus MCE Dr. Prince Kwakye Afriyie and the MP Prof George Gyan-Baffour for their support and collaboration to actualise the project.

Commissioning the project for use Friday 26th June 2020, the Municipal Chief Executive Dr. Prince Kwakye Afriyie called on the people to support the government's educational agenda.

He added that the government has touched lives in all sectors, noting that the Akufo-Addo led administration has proven beyond every reasonable that given another chance, it would maximise the lots of the citizenry.

He pointed out numerous major policies and initiatives being rolled out under Education, Agriculture, Health, Roads, Social interventions, etc, and job creation.

The MCE disclosed that plans were underway to refurbish the government ICT Centre in addition to that of the Library and a recently established ASWAQ ICT Centre to make Wenchi a technology hub in the Bono Region.

Dr. Kwakye Afriyie again disclosed that a Thirty Million (GHC30m) water project contract has been signed for construction of water system to provide quality water for all in the Municipality which would go a long way to wean the area off peculiar water challenges.