France and Sahel leaders gather for summit on anti-jihad campaign

By Jerome Rivet with Laurent Lozano in Dakar 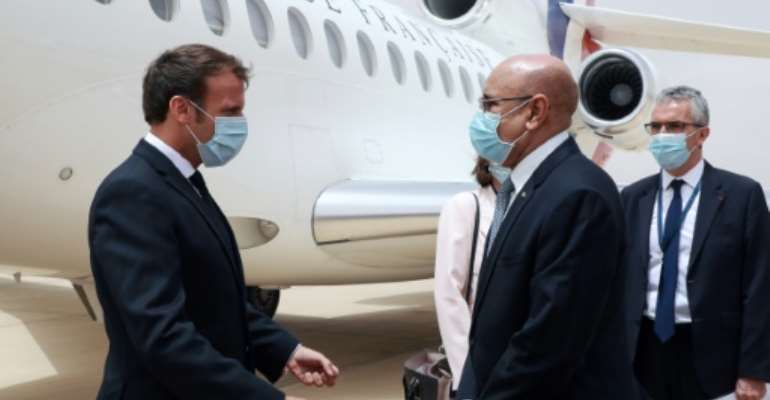 Leaders from five West African countries and their ally France gathered Tuesday to take stock of a new strategy to intensify the fight against jihadist insurgents in the Sahel.

Meeting in the Mauritanian capital Nouakchott, the presidents were to review a campaign that they rebooted in January after a string of reversals.

Since then, the jihadists have continued to carry out almost daily attacks, but they are also under pressure, losing a key leader to a French raid and fighting internally, say security sources.

Wearing a mask as he arrived for his first trip outside Europe since the start of the coronavirus epidemic, French President Emmanuel Macron said the summit sought to "consolidate the gains".

The allies have notched up "real successes over the past six months, neutralising feared leaders," he said, praising the "upscaling of intervention" by Sahel armies.

Troops in the Sahel are fighting an elusive foe whose specialities are road mines and hit-and-run raids aboard motorbikes. By MICHELE CATTANI (AFP/File)

Macron hosted a summit in January to help secure a stronger public commitment from Burkina Faso, Chad, Mali, Mauritania and Niger at a time of deepening concern in France after it lost 13 troops in a helicopter crash.

The insurgency kicked off in northern Mali in 2012, during a rebellion by Tuareg separatists that was later overtaken by the jihadists.

Despite thousands of UN and French troops, the conflict spread to central Mali, neighbouring Burkina Faso and Niger, stirring feuds between ethnic groups and triggering fears for states farther south.

Thousands of soldiers and civilians have been killed, hundreds of thousands of people have fled their homes and the economies of the three countries, already among the poorest in the world, have been grievously damaged.

Macron arrived for a one-day round trip from Europe for a summit expected to last only a few hours, with representatives from the UN, African Union and European Union in attendance.

Closed-door talks will then open out to include the leaders of Germany, Spain and Italy, who will be included over video link.

The meeting marks the first time that Sahel allies have gathered physically since the start of the coronavirus crisis.

One priority will be to assess affairs in the "three-border region," a hotspot of jihadism where the frontiers of Burkina, Niger and Mali converge.

France, which added 500 troops to its Sahel mission after the summit in the French town of Pau, is co-leading the campaign in this region, targeting an Islamic State-affiliated group led by Abou Walid al-Sahraoui.

Earlier this month, French forces in northern Mali, helped by a US drone, killed Abdelmalek Droukdel, the head of al-Qaeda in the Islamic Maghreb (AQIM).

And in a new development, jihadists respectively linked to al-Qaeda and Islamic State have clashed several times since the start of the year in Mali and Burkina Faso, after long steering clear of one another, according to security experts.

Despite this, problems in the Sahel run deep.

Local armies are poorly equipped and under-funded, rights groups say troops are to blame for hundreds of killings and other abuses of civilians, and in some areas the presence of government has evaporated.

General Oumarou Namata Gazama, head of the G5 Sahel force. The five-nation scheme has encountered many problems, from funding and equipment to training and coordination. By MICHELE CATTANI (AFP/File)

Staunch French ally Chad has yet to fulfil a promise to send troops to the three-border region, and a much-trumpeted initiative to create a joint 5,000-man G5 Sahel force is making poor progress.

In Mali, anger at insecurity has fuelled discontent over coronavirus restrictions and the outcome of elections, creating a political crisis for President Ibrahim Boubacar Keita.

Both Burkina and Niger are due to hold presidential elections by year's end, fuelling concerns about the outcome.

Macron stressed the need "to do more in terms of the return of the state," particularly "in Mali, in Burkina, in a context that we know is very complex."

In response to lobbying from France, a group of European special forces called Takuba, numbering 310 men, is mustering to help Malian troops.

And on Monday, the UN Security Council voted unanimously to extend the mandate of the 13,000-troop MINUSMA peacekeeping force in Mali for another year, to June 30 2021.

Fuel price increases: Akufo-Addo, Bawumia callous about the ...
31 minutes ago

Cape Coast Airport will be constructed at all cost - Akufo-A...
31 minutes ago