'Save my skin': Migrants share stories of close shaves in Libya 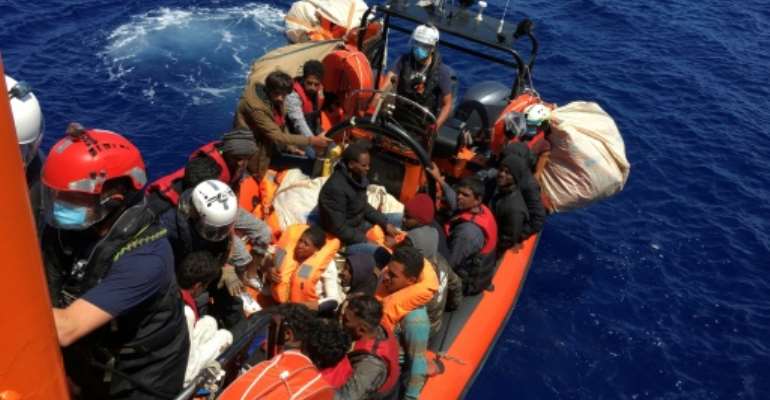 "I could die out here at sea, but at least I have a slim chance of making it," says Hafiz, a 30-year-old Eritrean. By Shahzad ABDUL (AFP/File)

Libya lies behind and Europe ahead though the mist -- rescued migrants can dream a little onboard the Ocean Viking as it drifts somewhere between Italy and Malta.

Rescued from two wooden boats, 118 migrants, including a pregnant woman, are finally on one of the last stages in their quest for a better life, crossing the Mediterranean.

At the mention of Libya, Hafiz, a 30-year-old Eritrean, holds his head as if to ward off blows.

"All I want is to save my skin. If I had stayed in Libya, they would have ended up killing me," he told AFP onboard the rescue ship.

"I could also die out here at sea, but at least I have a slim chance of making it."

Hafiz says he survived four years of torture, kidnapping, beatings and seeing a friend killed for his cell phone.

The worst was three years in prison "for nothing, without seeing the light of day", he says.

"After three years, a guard asked me what I was doing there. I replied that it was up to them to tell me. When no-one could come up with an answer, they let me go. And then I could tell my family I was alive."

Hafiz, who fled his homeland via Sudan, does not care where he goes in Europe, "just someplace safe, where I cannot be killed".

A UN report in late 2018 used the testimony of 1,300 migrants to allege "unimaginable horrors" in Libya including "unlawful killings, arbitrary detention and torture, gang rape, slavery, and human trafficking".

Mohammad Tareeq Saleem, 40, says he survived seven years in Libya, where he worked in a food shop. The Pakistani native suffered confinement and assaults, including a knife wound just before setting out to sea.

He put up with the violence to earn money for his wife and six children in Lahore, but the fighting in Libya has destroyed jobs and after losing his, Mohammad borrowed money from friends to try and reach Europe.

"My mission is to work and earn money to feed my family," he says.

Cameroonian Mervis, 24, is the only woman migrant on board -- she is five months pregnant.

She and her Ghanaian husband are "just looking for a place where the child will not suffer".

She pulls up a leg of her sweatpants, which was covered by thick socks, to show where Libyan jailers broke her tibia "just to torture me".

Mervis speaks French and her husband English. They hope their child will be born in Germany and have a fresh start.

The Ocean Viking rescue ship is waiting for permission from either Italy or Malta to dock. By Alessandro SERRANO (AFP/File)

Aymane is headed back to Europe, having already lived in France for three years.

Sporting a pony tail and gold-trimmed sunglasses, he will not say how he reached Europe previously, just that he sold clothes in the Clignancourt flea market in Paris.

Aymane returned to Morocco after his father died to find that prospects for young people were dire.

"You work a lot and earn almost nothing," he says, so one night he "crossed the desert" to reach Libya and find passage back across the Mediterranean.

The Ocean Viking, a Norwegian-flagged ocean supply vessel chartered by charities, is waiting for permission from either Italy or Malta to dock.

"Let us in," Mervis pleads. "We just want to live in peace!"