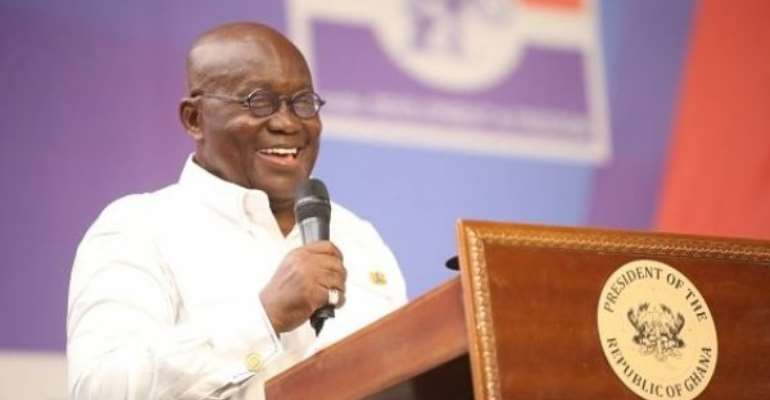 President Akufo-Addo has called on the ruling New Patriotic Party (NPP) faithful to promote the achievements of government in the management of the affairs of country, as the party seeks re-election in December.

“We have a good story to tell, and we should go out to tell it. On every sector of our lives, we should show the difference between the NPP way of tackling problems, and the way our opponents do it,” he urged on Saturday in Accra when addressing the Extraordinary meeting of the Party's National Council after his acclamation as the NPP's flagbearer for the December 7, 2020 elections.

His acclamation as the Presidential candidate, and the subsequent endorsement of Vice president Mahamudu Bawumia by the Council as his running mate, completes the party's presidential slot for the December polls.

An elated President Akufo-Addo, expressing his appreciation to leadership and members of the party for the confidence reposed in him and his running mate to lead the NPP to an “unquestionable and resounding victory” in the elections in December, pointed out that the party was the only political tradition in Ghana's history to “espouse the development of the country and of the individual as part of our foundational beliefs.”

“Whenever we have had the opportunity to govern, we have been guided by this long held principles. That is who we are. We have been consistent. It is in our DNA, and we dare not, and would not stray from them.

The President noted that in the three and half years of his administration, the government had kept its eyes firmly on building an economy that would create wealth for the entirety of Ghanaians, pointing out that all the flagship programmes that have been implemented by government “are rooted in the effort to liberate the energies of the people to grow an economy of which all the people can be part”

He said though his administration inherited an ailing economy in 2017, “We can be proud of what we have been able to achieve in the past three and a half years…We are not there yet; we are not where we want Ghana to be; and we are very much aware of the amount of work that remains to be done.”

President Akufo-Addo spoke about the interventions the government had instituted in the educational sphere, particularly the Free Senior High School policy and the free technical and vocational training, which had brought relief to many homes, and would contribute to Ghana's accelerated development.

He also touted government's delivery of physical infrastructure across the country, the many other social and economic interventions including the One district One factory and the Planting for Food and Jobs policy, as well as the commendable handling of the coronavirus pandemic, which showed that the government had prepared the economy for tougher times

The President said the party had a good story to tell, urging members to show the citizenry the difference between the NPP's way of tackling issues and that of their opponents, saying, “We have demonstrated though, beyond any shadow of doubt, our competence in the management of the national economy, since, without competence, we cannot improve on the welfare of the masses.”

“We grow the economy, they shrink the economy. We create the properly regulated, enabling atmosphere for business to flourish, they allow chancers and speculations to lure citizens into putting their monies into dodgy enterprises. They bring our banks and financial services to near collapse, and we have to clean up, shore up and restore confidence.

He continued: “They plunge us into Dumsor, we keep the lights on. They look on clueless, as hundreds of thousands of Ghana's children exit school at JHS, we bring Free SHS and Free TVET to prepare our children better to face life. They resort to crude language when faced with difficult arguments, we raise the level of public discourse.

“We owe it to ourselves and to Ghana to win the elections in December decisively, to make sure that we keep the economy on track, and not in the hands of people who will run it into the ground again. We have to win the election to see our many projects through to conclusion, we dare not leave the many factories under our ID1F scheme, to be truncated.

“I urge you, therefore, my dear friends and colleagues, to go out with the confidence that comes from your government performing well, and running the affairs of the country competently. Tell our story to the Ghanaian people, and tell it often,” he said.

President Akufo-Addo called on all party members to close their ranks, and work to secure victory for the party in December.

“Let us work hard together for a great victory on 7th December 2020, and embrace the future and our destiny”.

The extraordinary National Council meeting at the Alisa Hotel, presided over by former President John Agyekum Kufuor, acclaimed President Akufo-Addo as the party's presidential candidate in consonance with Article 13 (2) (1) of the NPP Constitution that provides for acclamation where there is a sole candidate for the Presidency by the close of nominations.

President Akufo-Addo emerged the sole candidate for the party for election 2020 at the close of nominations for the Flagbearer of the NPP, would be going into his fourth consecutive presidential contest since 2008.

A legal luminary, businessman and an astute politician, President Akufo-Addo represented the party in the 2008 Presidential elections, won the first round of voting with more than 49 percent of the vote, but lost to Professor John Evans Atta Mills of the National Democratic Congress (NDC) in the second round of voting.

He again contested the 2012 elections on the ticket of the NPP and lost to John Mahama of the NDC. But on his third attempt in 2016 as the NPP's flagbearer, he won the presidential contest overwhelmingly with 53.8 per cent of votes cast.