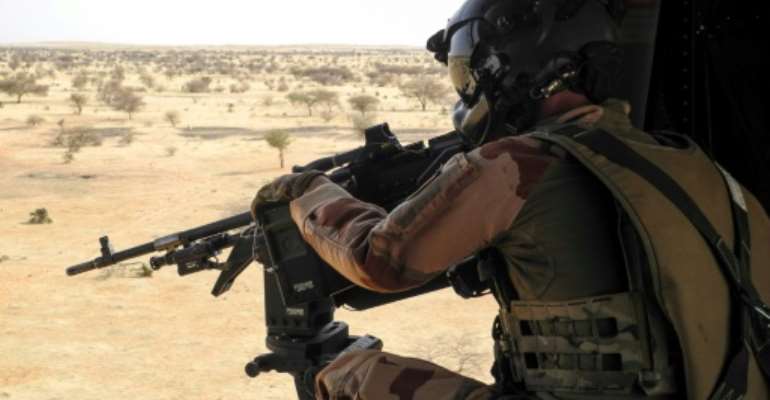 On patrol: France has committed more than 5,000 troops to its anti-jihadist force in the Sahel. By DaphnÃ© BENOIT (AFP)

France is increasingly optimistic about the effectiveness of its anti-jihadist campaign in the Sahel, but experts caution that short-term successes will not by themselves bring lasting victory.

President Emmanuel Macron will travel to the Mauritanian capital Nouakchott on Tuesday for a summit of West African leaders to discuss their joint effort to roll back jihadists in the sprawling region.

France responded by beefing up its Barkhane anti-jihadist force in West Africa -- now over 5,000-strong with 600 recently-added troops.

Earlier this month, the French army claimed one of the biggest successes in its seven-year campaign, with the killing of the head of Al-Qaeda in the Islamic Maghreb (AQIM), Abdelmalek Droukdel.

The operation's main focus now is to track down militants from the Islamic State in the Greater Sahara (IS-GS) in the border area shared by Mali, Burkina Faso and Niger.

The IS-GS has itself been fighting Al-Qaeda-affiliated groups, according to the French army, and has sustained heavy losses in recent months.

"We have reversed the principle of uncertainty. We are the ones who are unpredictable for terrorist groups," a senior officer in the French general staff, asking not to be named, told AFP.

"Today in the Sahel, victory is possible and this idea is taking hold among our partners," added an advisor to Macron.

Despite rising French confidence, many struggles lie ahead, say specialists of the region.

Jean-Herve Jezequel, an analyst for the International Crisis Group (ICG) said it was "undeniable" there had been "tactical" successes but self-congratulation may be premature. 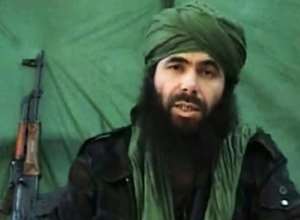 Killed: Abdelmalek Droukdel, head of Al-Qaeda in the Islamic Maghreb (AQIM). By - (Hand-Out/AFP/File)

"The French have already talked like this on several occasions," he told AFP.

A source with a humanitarian group in the area, who asked not to be named, told AFP: "There have been big tactical successes but the long-term impact is limited or even zero."

In the immediate, the Barkhane force has left areas where jihadists had been defeated to focus on other places.

In doing so, they have "left the field open to the very jihadists they had chased away," added the source.

Macron earlier this year signalled that all the options were on the table for the future of the French force, including withdrawal.

But now officials in Paris emphasise that while French troops will not be there forever, it is too soon to pull out.

The governments of these countries, among the poorest in the world, are struggling to reinvest in the newly-retaken territories and win hearts and minds.

They have to provide security, education, justice and basic services -- "the military are only one tool" in a strategy to defeat jihadism, French Defence Minister Florence Parly warned recently.

The US State Department's 2019 report on terrorism, issued this month, noted the problems facing French allies, which have suffered a 250-percent rise in attacks since 2018. 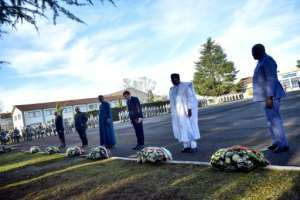 Show of solidarity: Sahel leaders gathered with French President Emmanuel Macron in January to lay wreaths in honour of seven French soldiers who died in a helicopter crash in Mali. By Alvaro BARRIENTOS (POOL/AFP)

"Partner countries remain strong-willed against terrorism but lack the means to contain or degrade the threat on a sustained basis," it said.

But the force lacks equipment, training and funds.

It "is not yet capable of disrupting the growing terrorist footprint across the Sahel but has potential as a coordination mechanism", the State Department report said.

France has lobbied hard for military support from its European friends, and this is now bearing fruit.

Around 100 Estonians and French will be deployed in the coming months, followed by 60 Czechs later this year and 150 Swedes in 2021.