Journalists Schooled On Election Reporting Ahead Of 2020 Elections 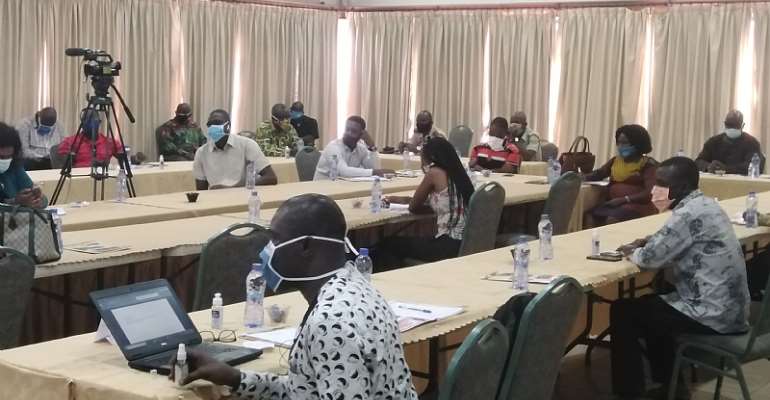 The Ghana Journalists Association has held a media convention for journalists in the Ashanti, Bono, and Ahafo Regions, ahead of the 2020 polls.

The training convention sponsored by the US Embassy in Ghana dubbed "The 2020 Election: Role of the Media in Promoting Civility and Discernment in the Political Discourse".

The training aimed at equipping journalists across the country with accurate reporting skills, during the 2020 elections as a means of inculcating cooperation spirit among the Ghanaian.

The media convention program which was started in 2012, and also featured the 2016 election, seeks to bring together among the media and the election actors, thus, the electoral commission, security, political parties, and other major stakeholders.

The chairman of the National media commission, executives from National and Ashanti Journalists Association, director of Election At the electoral commission, Mr. Benjamin Bio, members from the security agencies, journalists, among others were present.

The program has been spread in centre's to benefit other media professionals, across regions.

In a welcome address read on Him behalf of the president of the GJA, Mr. Affrail Monney by Mrs. Linda Asante Adjei the Deputy of President of GJA Says the convention seeks to assist the media to inform and educate the electorate towards the pending election, which focuses on GJA guidelines for reporting.

He said, the training will deal with attacks on the media during the election, its course, and its effects.

Affail Monney also advised media to desist from election malpractice and to prevent reportage that creates tension in the country.

Mr. Yaw Boadu-Ayeboafoh, chairman of the National Media Commission in his presentation on 'GJA guidelines on election coverage and the various guidelines of the NMC: Correlations and Synergies' urged journalist to resort to training programs to improve their capabilities.

"The media can only make impart by beginning from themselves since they can't give what they don't have", Mr. Boadu stated.

This according to him, will aid journalists to be circumspect of their reportage on national issues, without fear or favour.

He said the media should serve as a guardian to voters and the populace of the country, during and after the pending election.

He urged the journalist to defy their interest in reporting political issues, as they should work to uphold multi political parties in the country.

He also charged the media to provide credible, balanced, fair, and factual on their reportage.

Mr. Benjamin Bio, the director Ashanti Regional director of the election at the electoral commission outlined the commissions support needed from the which first of all, the media should be abreast with all timely information before reporting.

He said, the EC expects the media to be truthful, unbiased, and be objective with all political issues.

"We expect the media to consider the interest of the, avoid fake news and report on social media to harness media integrity".

He, however, expressed the commission's preparedness to continue dialogue with the media to ensure cooperation.

Nana Owusu Nyinan, the Chief of Kwamo, who chaired the occasion charged the media to defray from igniting fire through sensational and propaganda stories, but rather report facts and accurate.

He said that "traditional rulers have a role, therefore all should work hard to bring peace and harmony during and after the election".