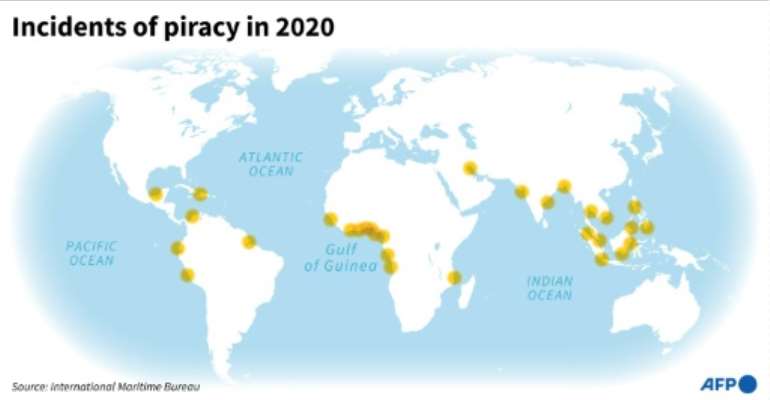 Incidents of piracy in 2020. By Thomas SAINT-CRICQ (AFP)

The Ghanaian-flagged Panofi Frontier with 30 crew on board was attacked on Wednesday about 60 nautical miles south of the Beninese capital Cotonou, they both said.

Seoul's foreign ministry said five of its nationals were seized along with a Ghanaian, and that the vessel had 24 more crew members on board.

"Currently, the identity and the whereabouts of the kidnappers have not been identified," it said in a statement, adding it was working with the relevant organisations and countries to secure the Koreans' release.

The International Maritime Bureau confirmed the attack by "armed pirates" and issued a warning to seafarers.

Map of Benin. Pirates kidnapped five South Koreans and a Ghanaian after attacking their fishing vessel on Wednesday, south of the Beninese port city of Cotonou.. By (AFP)

"All vessels are advised to maintain a vigilant anti-piracy watch and measures including at anchorages," it said in an alert.

Noel Choong, head of the IMB's Kuala Lumpur-based piracy reporting centre told AFP it appeared the pirates had headed "into Nigerian waters with the kidnapped crew".

The remaining sailors and the vessel were safe, he added.

The incident comes about a month after eight foreign crew members kidnapped from a Singapore-owned container ship off Cotonou were freed.

Benin lies at the heart of the Gulf of Guinea, which stretches 5,700 kilometres (3,500 miles) from Senegal to Angola.

Coastal waters in the centre of the vast region have become an epicentre of pirate attacks, lootings and kidnappings for ransom. Many of the pirates come from Nigeria.

The perpetrators are "increasingly seeking to target vulnerable vessels in waters beyond the traditional heartland of the Southern Niger Delta," said Dryad Global, a British maritime intelligence firm.