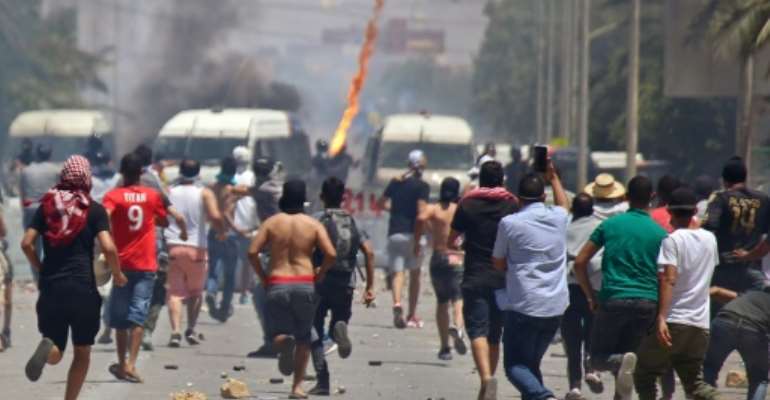 Tunisian protesters clashed with security forces as they demonstrated in the southern city of Tataouine in recent days. By FATHI NASRI (AFP/File)

A protest leader in southern Tunisia was released Wednesday, a lawyer said, four days after his arrest amid angry protests over unemployment in the marginalised region.

Tarek Haddad is the spokesman for a growing popular mobilisation underway in Tataouine, a town where protesters are demanding authorities make good on a 2017 promise to provide jobs.

He had been arrested overnight on Saturday and charged with "participating in a gathering likely to disturb the peace".

On Sunday and Monday, police in Tataouine clashed with protesters denouncing the government's unkept promises and demanding Haddad's release.

A court in the town of Tataouine, accepted a request for activist Haddad's release, one of his lawyers Sofiene Chariout told AFP.

"Overnight I find myself with detention orders and court cases," Haddad told AFP by phone on his release from prison, adding that he believed the charges were aimed at hindering the protest movement.

For weeks, demonstrators have blocked roads and sought to prevent trucks from delivering supplies to the remote El-Kamour pumping station, a key site for Tunisia's small oil industry.

They are demanding the government honour a deal reached after a months-long 2017 sit-in, under which it pledged to hire thousands of unemployed workers and invest millions in the region's development.

On Tuesday night, youths clashed with police in another town in the deprived south, the interior ministry said Wednesday.

The protesters burned tyres and threw rocks at security forces, who responded with tear gas, Hayouni said, saying calm was restored by the morning.

Southern Tunisia is one of the country's most marginalised regions, with above average unemployment, failing infrastructure and a stunted private sector.

Ten years after the revolution that toppled Zine El Abidine Ben Ali, the government has yet to resolve regional inequalities.

A special cabinet meeting is scheduled for Friday on the situation in Tataouine, as the government faces tensions within its coalition.