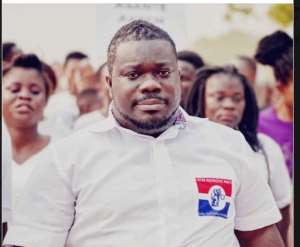 The Former President of MUSIGA, Bice Obour Osei Kuffuor has unleashed his rented thugs (machomen) to launch violent attacks on some of the NPP delegates in the Asante Akyem South Constituency in a bid to take back monies paid to them in exchange for votes.

Obour is said to have paid each of the delegates a whopping GHC2,000 and promised to add each of them a flat-screen television set. But in spite of the assurances from the delegates, the NPP parliamentary aspirant lost to the incumbent Member of Parliament, Lawyer Kwaku Asante Boateng by 68 vote difference. The incumbent polled 364 votes as against Obour’s 296 votes.

As a result, Obour angrily deployed his machomen to go after the delegates and collect his money back. Some of the delegates pleaded for mercy but Obour’s thugs would hear none of that.

Obour was very much confident of winning the NPP primaries as a first timer but eventually placed second. It is rumoured that the former MUSIGA Boss could not receive the news about his defeat and thus fell down flat on the ground.

Throughout the contest, Obour embarked on extravagant campaign portraying himself as the richest of all the aspirants and paid higher amount to the delegates even more than the incumbent MP, Kwaku Asante Boateng who also is alleged to have paid GHC1,500 to each delegate.