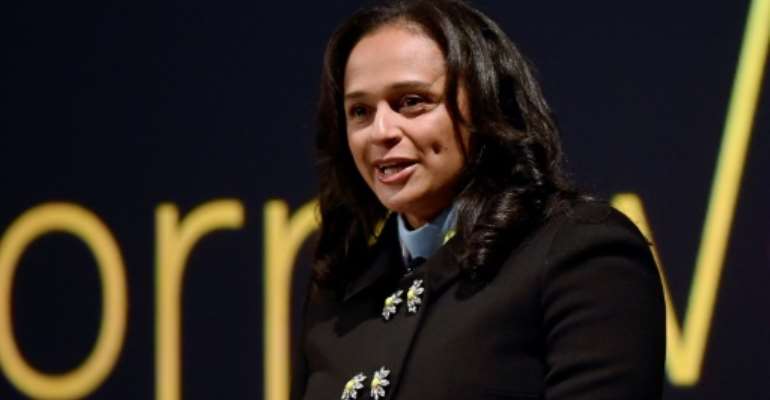 A court order that froze assets of Angola's billionaire former first daughter Isabel dos Santos was "unfair, improper" and based on fake documents, one of her lawyers has said.

Dos Santos, said to be the wealthiest woman in Africa, is accused of diverting billions of dollars from Angolan state companies during her father Jose Eduardo dos Santos's near four-decade rule of the oil-rich African nation.

Last December, a civil court in the capital Luanda issued a "preventive" order to freeze her businesses assets as part of a crackdown on graft by former president dos Santos's successor Joao Lourenco.

The 47-year-old businesswoman was "hit with this tsunami of allegations coming out of Angola based on secret documents -- which at that point she hadn't seen, and faked documents," said lawyer Dan Morrison.

"She didn't have a chance to defend herself," London-based Morrison told AFP in an interview on Thursday.

"This is manifestly unfair and improper," he said. "The damage is already done, whatever we prove in a court of law."

His client is a symbol of a small elite that prospered during the 38-year rule of Jose Eduardo dos Santos in sub-Saharan Africa's second oil-producing country.

Since her father retired in 2017, Isabel dos Santos's business empire has been targeted by Lourenco.

Just months after he came into power, and in the name of tackling corruption, LourenÃ§o unceremoniously sacked dos Santos from the state-owned oil corporation Sonangol which she headed.

Two years later her business assets and those of her Congolese husband Sindika Dokolo were ordered frozen.

The New Year's Eve order immediately set off a flurry of developments.

Isabel dos Santos was sacked from the state-owned oil corporation Sonangol which she headed. By Osvaldo Silva (AFP/File)

Days after that, the Angola prosecuting authorities said they were probing "irregular money transfers" from Sonangol and Sodiam, a national diamond marketing firm.

At the time, the public prosecution estimated the embezzled funds ran into about $1 billion.

It has now revised the figure to more than $5 billion.

Dos Santos herself has denounced Luanda's actions as a politically-motivated "witchhunt".

After analysing a trove of more than 700,000 leaked documents, the International Consortium of Investigative Journalists (ICIJ) also accused her of looting state coffers.

The journalists' report was "based on many fake documents and false information," she tweeted, describing it as "a coordinated political attack" constructed by the Angolan government.

Subsequently, Portugal froze her assets in that country, where she has invested mainly in banking and telecommunications sectors.

Fighting back, dos Santos, ranked by Forbes in 2013 as Africa's richest woman, has enlisted the services of top-notch international lawyers and communications experts specialising in crisis and reputation management.

Morrison is senior partner and founder of London-based Grosvenor Law firm, with experience in handling "complex" litigation for high-profile entrepreneurs.

He has ripped apart Luanda's order to freeze her assets.

"This order was made in Angola, in a secret court based on evidence that we didn't see at the time," he said.

"We only literally... found legal access to the allegations about four weeks ago, six months after this order was made."

More importantly, he added, the freeze was based on "fake, forged or unsatisfactory" documents.

"The evidence Angola had was three pieces of paper," scoffed Morrison. "They are creating false evidence to fill in the gaps".

Last month, Isabel dos Santos released a copy of a fake passport -- bearing the signature of late martial arts film star Bruce Lee -- which was part of the evidence submitted to the Angolan court.

"If Angola has evidence (that) Isabel dos Santos did something wrong, they wouldn't have needed a fake passport," said Morrison.

Dos Santos and her husband are seeking to revoke the court order freezing their assets.

Morrison said they had not been formally furnished with the indictment bearing the criminal charges brought against her by Angola's attorney general Helder Pitta Gros.

Alvaro Joao, a spokesman for Angola's public prosecution office, told AFP that several civil and criminal proceedings had been opened against Dos Santos and Dokolo.

"The defence is trying to get us to discuss the proceedings in public but we will not do so," he said.

"The consortium of journalists has shown perfectly how (public) assets were looted."

Meantime, Dos Santos's lawyers have promised new revelations about the case in the coming days.