Canoe Fishermen Petition Akufo-Addo Rescue To Save Sector From Saiko 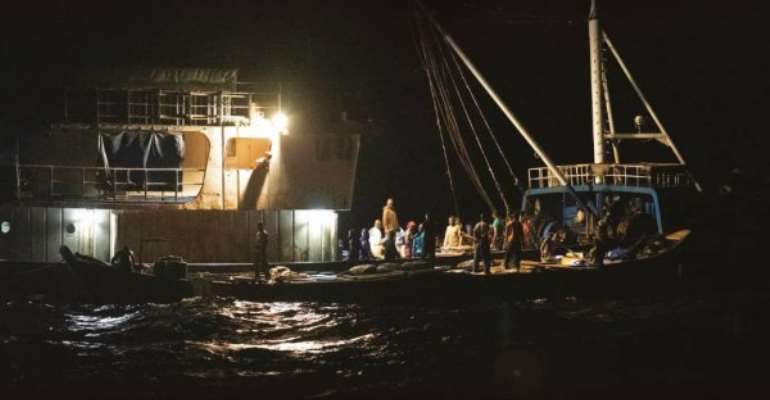 The Ghana National Canoe Fishermen's Council (GNCFC) and eight Non-Governmental Organisation (NGOs) working in the fisheries sector have called on Akufo-Addo to intervene to end the damaging illegal fishing practice known as 'saiko'.

'Saiko' is a destructive form of illegal fishing where industrial trawlers target the staple catches of canoe fishers and sell this fish back to local communities at a profit. It takes jobs, threatens food security and endangers the economy.

According to the fishermen and the NGOs, the practice was driving crucial fish stocks to the point of collapse and endangering livelihoods, nutrition and national security.

They said if the menace was not urgently addressed and measures instituted to permanently eradicate it, the source of income for over 2.7 million Ghanaians would be lost.

These were contained in their open letter to the President as the World marked International Day Against Illegal Unreported and Unregulated (IUU) fishing on Friday.

“We note, with urgency, that any hope of saving Ghana's fisheries from collapse is contingent on ending the 'Saiko' menace without delay”.

The letter said in the context of the global COVID-19 pandemic, safeguarding livelihoods and food security has acquired an even more pressing urgency because the collapse of the country's fisheries sector would further undermine government's vitally important “Planting for Food and Jobs” agenda.

It said 'saiko' provides jobs to no more than 1,500 individuals whereas canoe fisheries provide 140,000 jobs to fishers alone and thousands more as fishmongers – the majority of whom were women traders, canoe carvers, input suppliers and fish carriers.

The letter highlighted the risk of unrest and threats to national security as the loss of jobs amongst the youth would contribute to the rise of social vices and crime within the fishing communities and our wider society.

According to the EJF, one of the signatories to the letter, over 90 percent of industrial trawlers licensed in Ghana are linked to Chinese ownership.

New vessels have continued to arrive from China, despite a February 2012 moratorium on new industrial trawlers entering Ghanaian waters to address severe depletion of fish stocks.

“Of the 68 industrial trawl vessels licensed to fish in Ghana from March-June 2018, at least half were built in 2013 or later, after the moratorium on new or replacement vessels came into effect”.

Mr Steve Trent, Executive Director of EJF, said ending 'saiko' would be a marker of the President's leadership and would be of great benefit to the people of Ghana.

He said it would enhance food security and safeguard jobs, stimulate the economy and boost the well-being of the nation.

“The fishing industry, from law-abiding trawler operators to small-scale canoe fishers, is in favour of eradicating the crime of 'saiko' fishing. Only the criminals who run this illegitimate, destructive business are opposed”, he said.