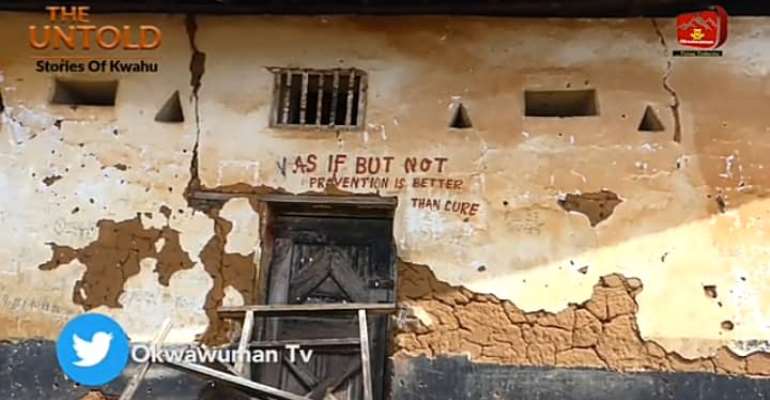 Okwawuman TV brings you the story of one of the first native prisons in Ghana situated at Kwahu Abene in the Eastern Region of Ghana.

A 98-year-old man, teacher Agyapong narrates the full story behind the Abene native prisons and other interesting stories that ever happened during and after the prisoners were transferred to Koforidua Prisons.

The Nana Kofi Akyeampong who was the Kwahu Paramount Chief in 1932 built the prison based on the notion that prisons were not treating the prisoners well.

Another aged man in the community told the crew that the Koforidua prisons finally took ownership of nine prisoners in 1964 after some were tried, acquitted and discharged.

Part of the building which could be renovated and use as a museum has collapsed and abandoned.

One interesting story about the historic prison is that one of the notorious inmates Kofi Gyeni, a native of Kwahu Pepease and known for causing troubles always caused a problem with the aim of going back to the prison the next month after he has been released.

His main reason was to go back to the prisons because he does not want the remaining inmates to enjoy the crops they planted.