Jackson College Of Education Donates To Police And Prison Services 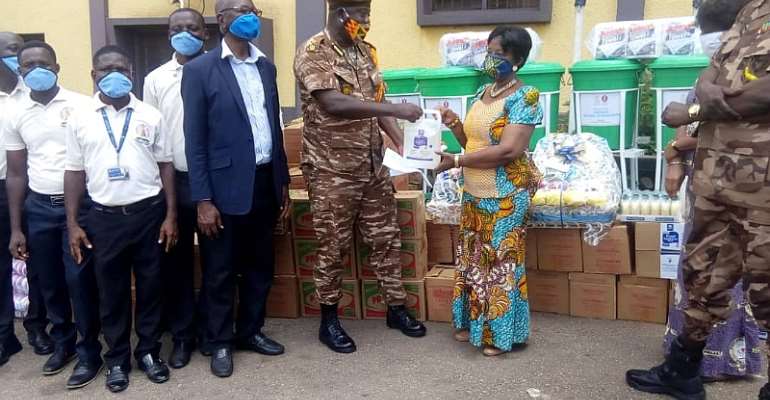 Jackson College of Education, Ghana’s premier private college of education continues to maintain its status as one of the most prolific donors to the Police and Prison Services in the Ashanti region over the years.

For many years, the College has been donating essential items including food, detergents, toiletries, medical supplies as well as cash to the Kumasi Central and Manhyia Prisons.

It renovated the washrooms at the administration block of the Kumasi Central Prisons and also re-roofed the entire cell of the Manhyia Prison which was badly leaking.

The Regional Police Command has also received several donations from the College which included office equipment curtains and other logistics.

These notwithstanding, the College on Friday, made yet another massive donation to the two institutions following a needs assessment conducted by the College weeks earlier.

Others were 2,200 packs of toilet tissues, 12 pieces of hand tissue, one carton of liquid soap, 2,200 pieces of bar soap and a hamper for staff.

The Deputy Regional Police Commander, ACP David Agyemang Adjem who received the items acknowledged the long-standing relationship between his outfit and Jackson College.

He said College has, over the years been a solid partner that had always supported the service in its quest to combat crime in the region.

“Making a donation of this magnitude in this COVID-19 era where most private institutions are suffering shows how committed Jackson College is to the cause of the Police Service”, ACP Adjem observed.

He entreated other public-spirited organizations to emulate the good example of Jackson College to collectively make the region one of the safest in the country.

The Ashanti Regional Commander of Prisons, Deputy Director of Prison (DPP) Samuel Owusu Amponsah, praised Jackson College for the immense support to both inmates and staff of the Central Prison.

He said all the items donated were essential to the upkeep of the inmates, adding that, the veronica buckets and hand sanitizers would also enhance efforts to prevent infections of coronavirus in the prison.

Mrs. Theodosia Jackson, Principal of Jackson College of Education who presented the items, said it was the collective responsibility of all Ghanaians to support the Police and Prison Services to perform efficiently.

She said quality service delivery by the two institutions would inure to the benefit of the entire populace and stressed the need to consistently support them as stakeholders.

She counseled the public to desist from crucifying the Police Service for the infractions committed by a few but rather give them the needed support to safeguard peace and security in the country.