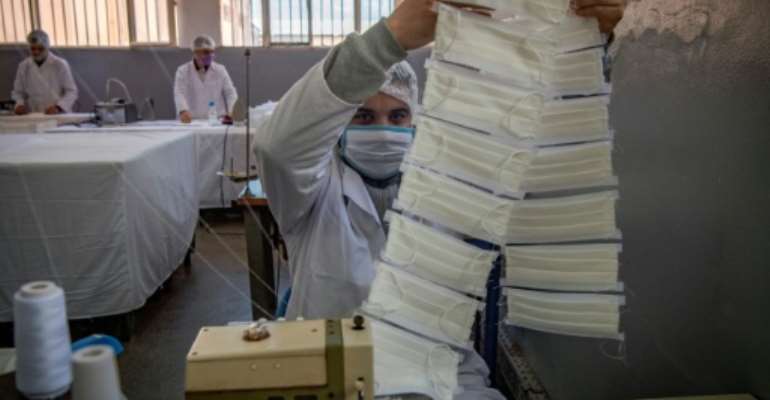 Prisoners in Morocco are doing their bit in the country's fight against the spread of coronavirus -- by making thousands of face masks for fellow inmates.

"We feel like we are contributing to the collective effort, even if it's from behind prison walls," 40-year-old Khalid, wearing a white coat and a face mask, told AFP during an interview in the presence of prison management.

An inmate at Casablanca's Ain Sebaa prison -- the kingdom's most crowded jail, with some 8,000 inmates -- Khalid leaves his cell every day for the sewing workshop, passing through long corridors that reek of disinfectant.

He finishes off the masks while others cut the fabric or pack the protective items into plastic bags for distribution to some 80,000 prisoners across the country.

Some one hundred inmates in around 20 Moroccan prisons are making 20,000 masks a day. By FADEL SENNA (AFP)

It has extended its lockdown until June 10, and anyone going outdoors requires authorisation and must wear a mask.

Police checks are frequent, and those caught risk up to three months in prison and a fine of up to 1,300 dirhams ($130) for violating the rules.

One of the aims of the pilot programme, launched at Ain Sebaa prison at the start of May, is to "foster a spirit of citizenship" among detainees and "help them to manage their detention during the lockdown", prison management said.

Over 300 virus cases have been recorded among inmates in several of the country's prisons. By FADEL SENNA (AFP)

Since Morocco declared a medical state of emergency in mid-March, prison visits and any activities that require outside intervention have been halted.

Hospital visits are limited to emergencies, while court attendance has also been suspended, with hearings held via video conference.

Over 300 virus cases have been recorded among inmates in the country's prisons, with about a quarter of infections among personnel, according to official figures.

Rights groups have urged authorities to release some detainees to limit the risk of infection among the country's notoriously overcrowded prisons.

At the start of April, King Mohammed VI pardoned more than 5,600 prisoners.

No cases have been registered at the Ain Sebaa facility, which has "rigorously" applied preventive measures, director Abderrahim Kerrari said.

Disinfectant has been installed at the main entrance and in areas leading to the cells, and sanitising gel stands on every table in the workshop.

Some of the mask-makers, like 54-year-old Mustafa, worked in the clothing industry before their arrest.

Since Morocco declared a health emergency in mid-March, prison visits have been halted. By FADEL SENNA (AFP)

He said he was happy to be "useful to society", while fellow inmate Wafaa, 37, said he'd signed up to develop skills and gain experience.

The programme also aims to "prepare inmates for reintegration into society by instilling in them values such as solidarity", Kerrari said.

Those taking part were already involved in the prison's sewing workshops, and received two days of training on mask-making.

Participants are paid for their efforts, based on the number of days worked, although the amount was not disclosed.

Collectively, some one hundred prisoners in around 20 Moroccan facilities are making 20,000 masks a day -- just a drop in the ocean when compared to the 10 million produced daily in local factories repurposed in the fight against the pandemic.

But in the workshop of the women's wing, 35-year-old Meriem expressed a sense of satisfaction in taking part.

"I am very happy to be doing a job that's useful for our people during the pandemic," she said.

"I feel I am doing my duty, even if it's just a modest contribution."