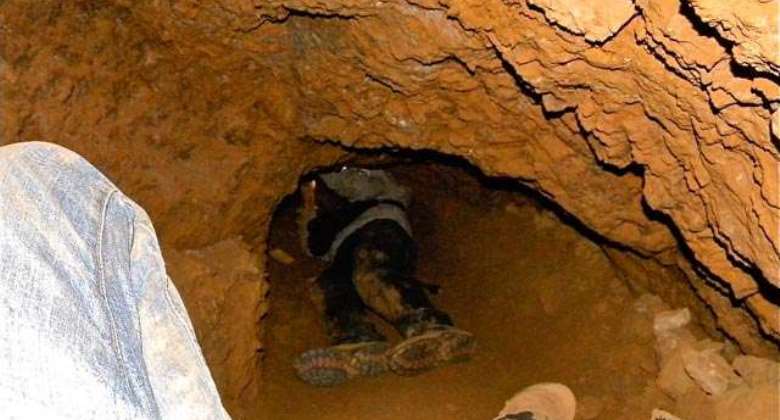 Two illegal miners have died after a mining pit collapsed on them.

The incident occurred May 18, 2020, around 9:00 am at a mining site of Nawara mining Company in Akyem Osino in the Fanteakwa South District of the Eastern Region.

The bodies of the deceased persons -Atwere Emmanuel, 29, and Gyimah Samuel have been deposited at Kibi Government Hospital Morgue.

Information gathered from the community indicate that the two went to scavenge for gold “known locally as kolikoli in an abandoned mining pit of Nawara mining Company with some other illegal miners.

However, whilst prospecting for the precious mineral, the pit suddenly caved in on them.

They were belatedly removed from the pit after strenuous effort but pronounced dead on arrival at the Hawa Memorial Hospital at Akyem Osiem.

A brother to the deceased, Asare Bright, reported the incident to Osino Police. The bodies were moved from the Hawa Memorial Hospital to Kibi Government Hospital Morgue.

The Public Relations Officer of the Eastern Regional Police Command told Starr News, Osino Police has initiated an investigation into the incident.

On May 1, 2020, a 37-year-old illegal miner Razak Bempong died in a similar manner at Akyem Mampong in Atiwa East District.

Razak Bempong and other illegal miners were illegally mining in a pit mined by Gold Bank Mining Limited when the pit caved in trapping him dead.

Illegal mining has resurfaced with impunity in many parts of the Eastern Region as the country battles coronavirus pandemic.

The Birim River has become polluted again, as a result, increasing the turbidity of the raw water sometimes to as high as 11,000NTU.