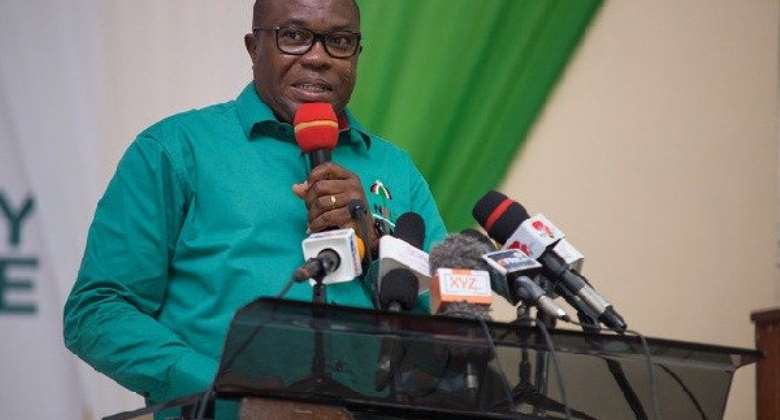 PRESS CONFERENCE ADDRESSED BY THE NATIONAL CHAIRMAN OF THE NATIONAL DEMOCRATIC CONGRESS, COMRADE SAMUEL OFOSU AMPOFO, ON THE ELECTORAL COMMISSION’S CLANDESTINE PLOY TO RIG THE 2020 GENERAL ELECTIONS IN CONCERT WITH THE NATIONAL IDENTIFICATION AUTHORITY.

Good afternoon distinguished friends from the media. It is my singular honour to welcome you all, on behalf of the National Democratic Congress (NDC), to this press conference.

Today’s engagement may seem rather unusual to some of you, obviously because our nation is united in a collective fight against the deadly and devastating global Coronavirus pandemic (COVID-19), which has ravaged nations, including Ghana, killed and hospitalized thousands, and debilitated most economies across the globe.

Indeed, the National Democratic Congress, led by our Flag-bearer, His Excellency John Dramani Mahama, has deployed every human and material resource at our disposal in support of government’s fight against this virus in Ghana. Led by our flag-bearer, and highly respected COVID-19 Technical team, the NDC has distributed close to a thousand PPEs to various hospitals and health facilities across the country, food and other consumables to thousands of deprived households and offered very useful technical and professional advice to government as we wage a collective war against a common enemy.

Distinguished friends from the media, while we all continue to rally round the Ghana flag to support government in this difficult time, it does appear that the Jean Mensah-led EC, ably supported by the Ken Attafuah-led NIA are only interested in rigging the 2020 general elections for President Akufo-Addo and the ruling New Patriotic Party through voter suppression in NDC strongholds.

We have invited you here this afternoon to explain to you in detail, our concerns over the management of the processes for the December 2020 elections and what is clearly a conspiracy between the EC, NIA and President Akufo1Addo to rig the 2020 general elections. It is the kind of conspiracy that has plunged many a country into chaos and instability. We of the NDC do not wish this for our dear country, hence our constant warnings.

Upon extensive consultations with all stakeholders including Political Parties, the following registration requirements were provided under section 8 of Act 750 to establish one’s eligibility to be registered by the Authority for a national ID card:

Upon assumption of office in the year 2017, President Akufo-Addo immediately set in motion his rigging agenda by causing this law, (Act 750) to be amended by the passage of The National Identity Register (Amendment Act), 2017 (Act 950). This new law (950) excluded the Voters’ ID card and the Driver’s License from the list of registration requirements without any legal or legitimate basis.

The exclusion of the Voters’ ID card from the requirements of registration for the national ID card by the Akufo-Addo government, was part of a well calculated scheme to disenfranchise a good number of Ghanaians from acquiring the national ID card (Ghana card), which was to be used subsequently, as one of the registration requirements in the new voters’ register plan they had long hatched.

Friends from the media, the exclusion of the voters’ ID card from the registration requirements for the Ghana card was completely untenable as it contradicts every known best practice in Identity Management. All across the world, Experts in the field of Identity Management agree that an identity document for a national database must be possessed by a significant number of the population, prevent duplication, and has enough information for easy verification of identity.

Per this international standard, the Ghanaian Voters’ Identity Card ranks exceptionally high amongst all the identity cards that have been provided under Act 950. In spite of this fact, President Akufo-Addo Addo and the ruling NPP have persistently bastardized the Voters’ ID card, excluded same and rather promoted a total reliance on Birth Certificate and Passport (which requires the birth certificate to obtain), as the main registration requirements for the Ghana card, despite the relatively low integrity and credibility of these identity documents.

This point is buttressed by the “Paper Citizen” documentary of Joy FM which exposed how Birth Certificates are cheaply and illegally procured by both citizens and foreigners with the aid of some corrupt officials at the National Headquarters and Regional Offices of the Birth and Death Registry.

Our position on this matter all along has been that, the NIA’s total reliance on the Birth Certificate and Passport as the main registration requirements for the Ghana card is problematic and will lead to a situation where about 76% of Ghanaians will have no ID documents to establish their eligibility. These persons would have to go through a cumbersome process of obtaining a sworn oath before they can be registered for the Ghana card; a process we have maintained will slow down the registration process and disenfranchise a lot of Ghanaians.

Consequences of NIA’s over-reliance on the Sworn Oath Option

Ladies and gentlemen of the media, you would recall that right from the outset of the Ghana card registration exercise, we cautioned the NIA that their choice of breeder documents (Birth Certificate and Passport), coupled with their own methods for the instant issuance of cards will lead to a snail's pace registration process.

However, the Attafuah-led NIA rejected this good counsel and decided to take a gamble, in the hope that the sworn oath option, which per best practices, is supposed to be employed to register a very small percentage (usually 5%) of the population who do not have any form of identification, could cure the problem we had foreseen.

As we predicted, the Ghana card registration process by the NIA has been very slow such that till date, the process which commenced with a pilot late 2017 and was supposed to be completed in one year, has been able to register only 11,062,055 out of about 19 Million Ghanaians (15 years and above) who are eligible to be registered. Even more bizarre is the fact that, out of this 11 million Ghanaians who have been registered, only 7,074,048 have been issued with cards (per NIA’s own website https:nia.gov.gh) as at 2nd May, 2020).

In spite of several assurances made in Parliament and in the media by the President, The Head of NIA and Electoral Commission that the Ghana Card is not going to be used for the 2020 elections, the Government and the Commission are currently pushing a legislation in Parliament to make the Ghana Card and Ghanaian Passport the main breeder documents for registration as a voter, thus excluding the use of the Commissions' own existing voters’ ID card.

The objective is to disenfranchise a significant number of persons in NDC strongholds in furtherance of the Jean Mensah-led EC’s grand scheme to rig the 2020 general elections for the New Patriotic Party.

According to the NIA’s own data, out of an estimated population of 17.3 million being 18 years and above, only 6.5 million have been issued with the Ghana Card. The implication is that, almost 11 million (constituting 62%) of eligible voters will have to go through the sworn oath option to be able to register for a Voters’ ID, if the EC’s illogical and wasteful decision to compile a needless new Voter’s Register for the 2020 general elections materializes.

Ladies and Gentlemen, even more disturbing is the breakdown of percentage per region of those who have to go through sworn oath to register as voters as depicted by the table below;

Ladies and Gentlemen, it is worth pointing out the following notable regions:

3. Coming down to the Ahafo Region through to the Central Region, the situation is no different. In Ahafo for instance, out of 349,474 registrable population, only 27,166 representing 7.77% have been issued with the NIA cards leaving as many as 92.23% that must go through the Sworn Oath option.

Considering the time limitation imposed on the nation by Covid-19, this is not only impracticable but simply defies common sense and will surely disenfranchise a lot of eligible voters if the EC is allowed to proceed on this dangerous path.

Ladies and gentlemen, in sharp contrast to the suppression of Ghana card registration in mostly regions which are known to NDC strongholds, the Ken Attafuah-led NIA massively mobilized unprecedented number of registration equipment for the exercise in the stronghold of the ruling NPP, the Ashanti Region.

This is the same reason why President Akufo-Addo encouraged the NIA to continue the Ghana card registration process in the Eastern Region, another stronghold of the NPP, even as he was restricting movement and gatherings, including church and mosque prayer services in the wake of Ghana recording positive cases of the coronavirus.

Distinguished friends from the media, it does appear that the President who at age 74 is in the twilight of his long stint in politics, is not concerned about the future of Ghana, its peace, stability and the survival of democracy. Prior to becoming President, Akufo-Addo had presented himself as the paragon of excellence where democracy and rule of law are concerned. However, since becoming President, all his actions have unfortunately proven that was all talk, not substance.

Having failed to deliver on his promises to the people of this country, and seeing defeat staring glaringly at him, he in conjunction with the Jean Mensah-led EC and the Ken Attafuah-led NIA are desperately scheming to rig the 2020 general elections and hold on to power at all cost. Not even the unusual circumstances we find ourselves in, which require that we pull together for our collective survival as a nation, are enough to deter the actors of this plot from their ungodly act. While our country craves for vital investments and resources to overcome the COVID-19 scourge, President Akufo-Addo, aided by his ever pliable collaborators is bent on wasting huge sums of the taxpayers money to invite trouble for this country.

Ladies and gentlemen, election rigging is not a one day event. It takes place over time through the systematic manipulation of processes leading to Election Day. We have long raised red flags and alerted civil society, religious leaders, traditional rulers, the media and all peace-loving Ghanaians of the sinister rigging agenda of the Jean Mensah-led EC and the dangers it portends for our beloved country.

Indeed, many are those who have responded to the situation by even publicly questioning the rationale for a new voters’ register when the nation has an existing voters’ register which has delivered two (2) credible general elections and three credible (3) District Level Elections with legitimate outcomes.

It is to reassure the electorate of free and fair elections devoid of manipulation that the EC created IPAC whose inputs have over the years helped to guarantee a level playing field for all the political parties. Unfortunately, the Jean Mensah-led EC decided from the word go not to accord IPAC the same level of cooperation and respect as had been the case since 1994.

The conspiracy to use the Ghana card, Ladies and gentlemen, is the reason why at each and every turn, Jean Mensah seems impervious of the implications of her conduct and decisions. Her only mission and motivation, it appears, is to please President Akufo Addo and ensure his re-election for a second term.

The rigging of the procurement processes that led to the selection of Thales, a company of questionable background as the suppliers of BVRs for the EC; the decision to exclude the existing Voters’ ID card and rather include the Ghana card whose issuance has been fraught with serious anomalies, as a registration requirement for the illogical and needless new voters’ register the EC is seeking to foist on the nation, are all part of the grand rigging conspiracy of President Akufo-Addo, the Jean Mensah-led EC and the Ken Attafuah-led NIA.

But the NDC shall employ every legitimate means to stop this evil conspiracy to rig the 2020 elections and subvert the democracy of this country.