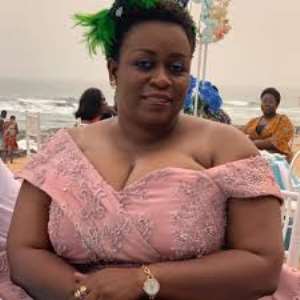 Following the outcome of the NCA trial where some former government officials of the previous opposition government NDC have been jailed, Deputy Communications Director of the ruling New Patriotic Party (NPP), Mame Yaa Aboagye says it serves them right.

According to her, the former NCA boss and his allies embezzled taxpayers’ money.

An Accra Commercial High Court presided over by Justice Eric Kyei Baffour on Tuesday, 12th May, 2020 convicted three (3) out of the five (5) accused persons who have been on trial in the case of “The Republic versus Eugene Baffoe-Bonnie and four others”.

The trial of the five accused persons; Eugene Baffoe-Bonnie, the former Board Chairman of the National Communication Authority (NCA), William Tetteh Tevie, former Director-General of the NCA, Nana Owusu Ensaw, a former board member, Alhaji Salifu Mimina Osman, a former Deputy National Security Coordinator, and a businessman, George Derek Oppong, begun on the 16th of January 2018 when the state called its first prosecution witness, the Director of Legal Administration at the National Communications Authority (NCA), Abena Awarkoa Asafo Adjei, and ended on the 10th of March 2020 after the state, led by the Director of Public Prosecution, (DPP) Yvonne Atakora Obuabisa, concluded her cross-examination of the 5th accused person in the case, George Derek Oppong.

The three were found guilty of indulging in acts that led the State to lose the amount in a deal purchase of a cybersecurity surveillance equipment, known as the Pegasus machine, for the National Security Council Secretariat (NSCS), which was sponsored by the NCA.

According to Mame Yaa, although the sentence slapped on the former NCA boss and two others is a good call, she, however, thinks the judge was lenient in his verdict.

She also called on the government to ensure all corrupt officials face the full rigors of the law.

"All corrupt officials placed at the helm of the public purse who decide to steal people’s money to enrich themselves must be fairly trialed in the law courts and jailed when found culpable.

“Now when I see comments like NPP doesn’t have a candidate, there is only one thought that comes to mind, thus, very soon all former corrupt government and public officials will follow suit because justice delayed is not justice denied . . . We will know who has a candidate or not. Everywhere is quiet and I’m glad that there is no accusation like witch-hunting and pointing fingers at NPP . . . I pray Airbus, Woyome, GYEEDA, SADA, ISOFOTON, AMERI, BUS BRANDING will also follow," she said.