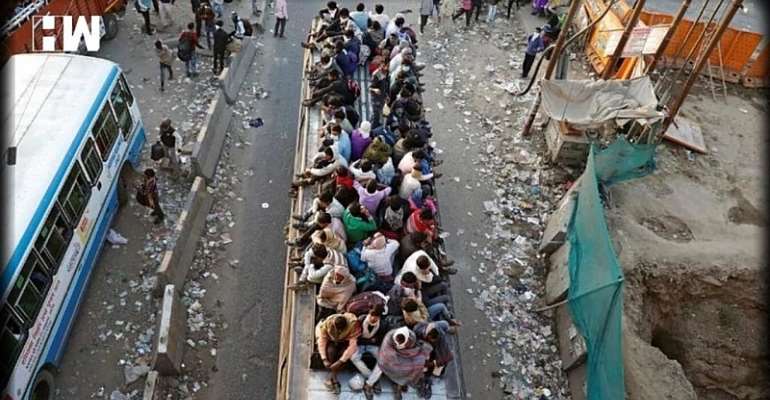 A humanitarian tragedy is unfolding in India as thousands of migrant workers are trying to return home, with many of them attempting to cross state borders, as the country's lockdown eases.

Last week, a freight train in India's western Maharashtra state's Aurangabad district ran over and killed at least 16 home-bound migrant workers who reportedly fell asleep on the tracks due to exhaustion.

These migrant workers did not have jobs, and sometimes food, for over a month as factories remained shut due to the nationwide lockdown in place to contain the spread of the coronavirus disease.

Desperation to return
“The lack of food and cash has put thousands of vulnerable migrants at risk. Many of them are going to think twice before coming back to the cities for work when the economy opens,” Gopal Mishra, a trade unionist told RFI.

The train accident put the spotlight on the severe hardships faced by millions of migrant workers in India over the past few weeks. Thousands of migrants have been left without work, money or shelter and have been marching to their hometowns from large cities with the easing of lockdown restrictions.

Civil society activists and aid workers maintain that over 300 people have died in this period  with many killed in road accidents, the inclement weather, exhaustion and sometimes, hunger.

Abandoned
“During the lockdown, unable to get assistance and despairing of any free travel home, migrants started the long and painful march back often avoiding highways, travelling through forests and side roads to avoid the police,” says Brinda Karat a member of the Communist Party of India (Marxist).

A survey of over 11,000 migrant workers by an NGO, Stranded Workers Action Network, found that almost 8 out of 10 migrant labourers had not been paid at all during the lockdown.

Though Indian Railways has been running special train services to transport migrant workers, based on requests from states, confusion reigns. With no standardised protocol in place, and limited means to test, screen and quarantine migrants, home states and host states are sparring over the logistics.

A monumental crisis
Meanwhile, some of the prosperous western and southern states, labour contractors, factories and small companies washed their hands of migrant labour the moment India went into lockdown.

“This left a vast swathe of migrants and daily wagers left to fend for themselves and many actually had to get their families in the villages to send money to their bank accounts,” Ajay Chauhan, a factory worker told RFI.

Only a few state governments have extended relief measures for stranded migrants such as free rations or cash transfers.

With the third extension of the lockdown dashing all hope that work would resume soon, about 50,000 migrant workers have been crossing over from Maharashtra into central Madhya Pradesh's Barwani district daily since 3 May.

Hundreds have been huddled inside trucks, precariously perched atop goods lorries, on bicycles, or simply on foot, in a desperate attempt to return home. At times, exhausted migrants sleep on the roadside while their children cry with hunger.

The government had initially asked the millions of stranded migrant workers to pay their own train fares home but now some states are refusing to give consent for trains ferrying them home. Various state governments are now squabbling over requests to accept migrants in light of the pandemic.

Freeze on workers rights
To add to workers problems, Uttar Pradesh and Madhya Pradesh, two states with substantial workforces, have frozen major labour laws, except basic ones, in the hope that businesses will recoup from the blow of the Covid-19 pandemic and create more jobs on a net basis.

Estimates of migrant workers in India range from 40 million to 120 million and there is still no accurate estimate how many have taken the long road back home.

The prospect of life with dignity and safety of the millions of migrants returning home looks distant.