Bolga: I Ordered My Men To Whip, Arrest The Traders For Demonstrating Unlawfully — Police Commander 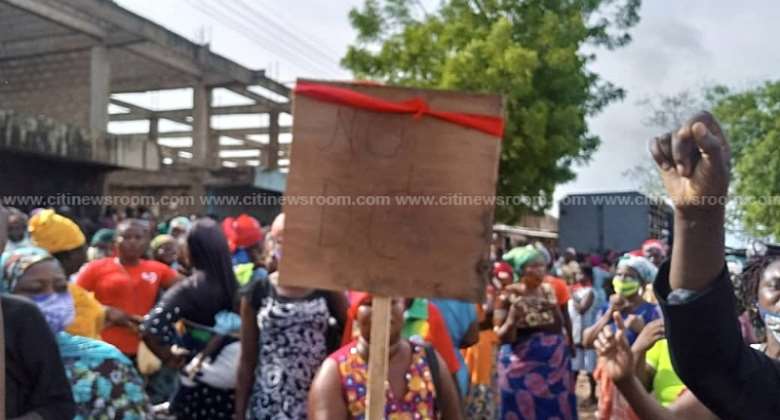 The Bolgatanga Municipal Police Commander, Superintendent Richard Anaba Salifu has admitted ordering his officers to whip and arrest some market women who were demonstrating against a decision to relocate them to a new and spacious market centre.

Some market women took to the street to demonstrate against the Bolgatanga Municipal Assembly's decision to move them from the Bolgatanga market to a new market.

The Assembly took the decision in a bid to ensure adherence to social distancing protocols in the wake of the coronavirus outbreak.

The traders however kicked against the relocation citing lack of adequate space at the new market.

During their protest on Monday, they were whipped by police officers from the Bolgatanga Municipal Police Command.

Some of the traders were also arrested but were later granted bail.

The Municipal Commander speaking on Eyewitness News took responsibility for the assault.

“I was in the office when I had several calls that some women are demonstrating in town so I asked what was the reason but nobody could tell me. So I just organized my men and we went to the scene. So when we got to the High Court junction, we met a group of women numbering about 60 and wearing red bands and chanting No DCE. So I asked them what was the problem and they told me they were angry and they will not even mind me.”

“So I asked them to disperse because they didn’t follow the instructions and were trying to move forward so I ordered my men to whip them and as many as we could, we should arrest them and process them for court. It was when we started whipping and arresting them that they started dispersing. So we managed to arrest a number of them and we are processing them for court.”

Superintendent Salifu explained that when he got to the office, he had another call that the traders had regrouped and were heading towards the police station.

“When I got out, they were almost at the police station so we had to use force again and managed to whip them and arrested some of them too because it was a security zone,” he added.

Following the outbreak of COVID-19 in Ghana, local assemblies have taken a number of measures to ensure social distancing in public places including markets.

Some of the markets were social distancing protocols became difficult to implement were subsequently closed down.

The Nima market in Accra was also subsequently opened after it was closed following a protest by the traders in the area.