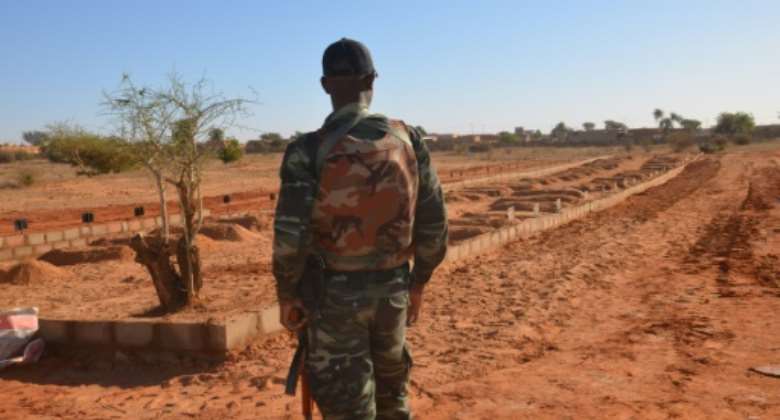 A Niger soldier looks at the graves of 71 Niger troops soldiers killed in a jihadist attack on December 10, 2019, ahead of a regional summit to coordinate a response to the growing unrest.. By Boureima HAMA (AFP)

UN General Secretary Antonio Guterres has warned that jihadist groups in the Sahel area of North Africa are exploiting the coronavirus pandemic to step up attacks, according to documents seen by AFP.

The United Nations chief called for better coordination among the various anti-jihadist forces fighting an array of armed groups.

"Terrorist groups are taking advantage of the COVID-19 pandemic to intensify their attacks and to challenge state authority throughout the sub-region," said Guterres.

He noted the problem was particularly acute in the area known as the Liptako-Gourma triangle, a border zone between Niger, Mali and Burkina Faso.

"Evidence also suggests that there is increased coordination and cooperation between some of the terrorist groups operating throughout the Sahel, from Mauritania to the Lake Chad basin," he said.

"The dire situation in the Sahel region is further compounded by the spread of the COVID-19 pandemic in Africa, with terrorist groups exploiting it for both propaganda and action purposes, with potential grave impact on the region," the secretary general added.

Because of the pandemic, which led to the border between Mali and Mauritania being shut, operations of the so-called G5-Sahel anti-jihadist force have been put off.

The G5 is a 5,000-strong force with troops from Chad, Burkina Faso, Niger, Mali and Mauritania cooperating with French troops to combat a growing Islamist insurgency.

"The impact of the pandemic on the ability of the Joint Force and international forces to conduct operations in the coming months is difficult to ascertain at this point and will need to be carefully and continuously assessed," said Guterres.

The secretary general's report on recent security developments in the Sahel region stressed that "the number of people who died from terrorist attacks has increased five-fold since 2016, with more than 4,000 deaths reported in 2019 alone as compared with an estimated 770 deaths in 2016."

Since November the reality on the ground "was marked by a deterioration of the security situation in Mali and the Sahel region, characterized by a rise in increasingly complex terrorist attacks, primarily targeting armed and security forces," the report warned.

Guterres called for "stronger coordination between the different forces and clarity with regard to command and control."

Besides the various national armies and the G5 force deployed in the Sahel area, the region also has a 5,100-strong French force and a 15,000-member UN peacekeeping group operating there.

There is also a new international force being launched after a French initiative and dubbed Takuba, which groups special forces from different countries.