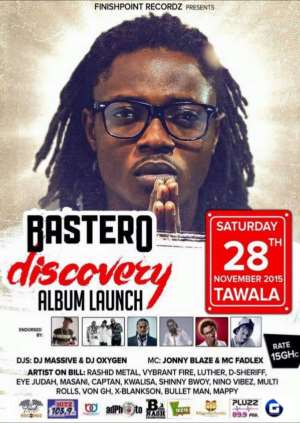 Fast-rising Ghanaian reggae/dancehall musician Basit Ibrahim known in showbiz circles as Bastero is set to officially introduce his first album to music lovers around the globe in style.

The album is titled 'Discovery' and has been earmarked to make positive strides particularly in Ghana and the world at large.

The launch which will take place at the La Tawala Beach on Saturday, November 28, 2015 in a form of jam has been envisaged to draw huge audience to the venue as the "City Boss" prepares to unleash yet another spectacular performance on the day.

The FinishPoint Recordz act who has as well been endorsed by some of Ghana's music industry greats like Stonebwoy, Samini, VVIP, Ras Kuuku, Tinny and Jupitar recently released his "Inna Mi Kingdom" single ahead of the show later this month.

More so, the "Done Dem" crooner who has in the meantime left fans to wonder about which of his well-brewed tunes to be on the album has the likes of "Link Up", "Done Dem", "Wyne Ur Behind" and many more to his credit.

In an exclusive interview with GlammyNews.com , the energetic musician who has graced stages including Stonebwoy's 'Go Higher Tour' and 'Necessary Evil' album launch as well as 2015 VVIP Sallahfest and more acknowledged how ready he and his management is for the album launch.

"We've been preparing meticulously ahead of the launch because the team want to present nothing but the best to the audience. The "City Boss" is ready to mash up the place so all should come out and support good music," he stated.

It will be graced by some of the country's prolific musicians including Rashid Mettal, Vybrant Fire, Luther, D-Sheriff, Eye Judah and Masani. Others include Captan, Kwalisa, Shinny Bwoy, Nino Vibez, Multi Rolls, Von GH, X-Blankson, Bullet Man and Mappy.

Disc Jockeys on the turntable will be two (2) of Ghana's favourites in the game and are DJ Massive and DJ Oxygen. It will however be hosted by ace Masters of Ceremony, Johnny Blaze and MC Fadlex will do what they do best.