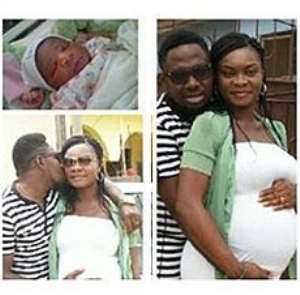 The actress tweeted shortly after the delivery that: “Finally VIOLYN BLESS AYEBEA BOADU BAAH is here. I tank God 4 a safe delivery of my dota.Am nw a proud mother.To God be the glory.”

Beverly Afaglo and Praye Honeho, after dating for about four years, got married on Saturday April 14, 2012 at the Action Chapel, Community 9, Tema.

Beverly Afaglo shot into fame through the popular television series About To Wed and has since then starred in several productions including, Frozen Emotions, Return of Beyonce, Big Girls Club, Total Exchange, Crime to Christ and Play Boy.

Eugene on the other hand is wildly known in the music industry for his Choir Master tag in the music trio, Praye.

He graduated from the National Film and Television Institute (NAFTI) in 2010.