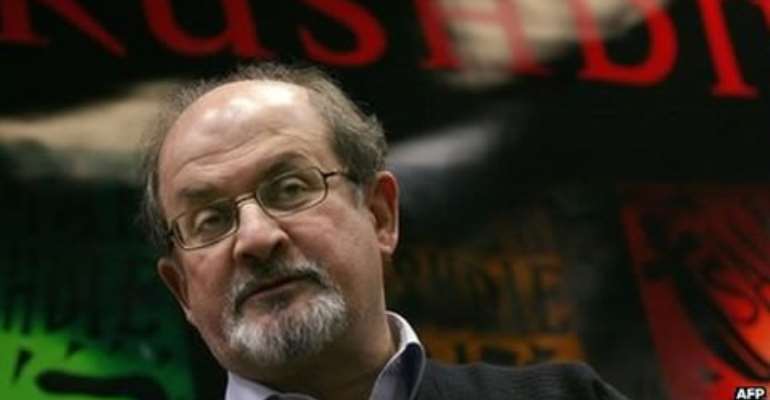 Salman Rushdie said he was outraged and very angry

Author Salman Rushdie has accused authorities in the Indian state of Rajasthan of giving "false intelligence information" of a threat to his life.

Mr Rushdie withdrew from the Jaipur literature festival on Friday, saying that he been told by sources that paid assassins were planning to kill him.

But he later said he believed he had been lied to about the threat.

The Rajasthan government has denied the charge, saying it was "baseless".

Salman Rushdie sparked anger in the Muslim world with his book The Satanic Verses, which many see as blasphemous.

He lived in hiding for many years after Iran's Ayatollah Khomeini issued a fatwa calling for his execution.

'Outraged'
The author had been scheduled to speak in Jaipur on Friday, on the opening day of the five-day event.

But Mr Rushdie pulled out of the festival, saying that he had been informed "by intelligence sources in Maharashtra and Rajasthan that paid assassins from the Mumbai underworld may be on their way to Jaipur to 'eliminate' me".

Influential Muslim clerics had protested against his participation in the run-up to the festival.

On Sunday, Mr Rushdie tweeted that he had investigated the information and believed "that I was indeed lied to".

"I am outraged and very angry," he said.
Rajasthan Chief Minister Ashok Gehlot told a newspaper that Mr Rushdie's allegation was "baseless".

"A confirmed information about a threat to Mr Rushdie's life was shared by the Intelligence Bureau with the organisers of the festival. Such inputs had started to come even before the beginning of the event," Mr Gehlot's government said in a statement.

However, the chief of the Maharashtra police has denied that his force had sent any intelligence related to threats to Mr Rushdie's life to counterparts in Rajasthan.

"When we had no information that gangsters or paid assassins from the Mumbai underworld had planned to eliminate Salman Rushdie, how could we have shared it with anybody?" K Subramaniam, director-general of Maharashtra police, said.

One newspaper reported that the festival organisers had been shown "an intelligence file about the threat to Mr Rushdie" a day before the festival opened, and they had informed the author accordingly.

Book readings
Mr Rushdie's latest remarks come amid a rising controversy over warnings of penal action against some authors who read passages from The Satanic Verses - which is banned in India - at the festival on Friday.

Writers Hari Kunzru, Amitava Kumar, Jeet Thayil and Ruchir Joshi read extracts from the book to protest against Mr Rushdie's withdrawal, leading the festival organisers to distance themselves from the readings.

Festival organiser and author William Dalrymple said that a lot of people "don't realise that even reading from a banned book is against the law".

Separately, a number of authors attending the festival have petitioned the government to reconsider the ban on The Satanic Verses.

The book was banned in India in 1988 for its "blasphemous content hurting the sentiments of Muslims".

Salman Rushdie was born in India but is a British citizen and has lived in the UK for most of his life. In recent years he has made many private visits to India and attended the Jaipur Literary Festival in 2007.

Correspondents say the protests against Mr Rushdie's participation at the festival this year were linked to crucial state elections due in Uttar Pradesh.

They say no political party wants to antagonise the Muslim community, which constitutes 18% of voters in the state, India's largest.

On 10 January, leading Islamic seminary Darul Uloom Deoband - which is based in Uttar Pradesh - called on the government to block Salman Rushdie's visit as he "had annoyed the religious sentiments of Muslims in the past".