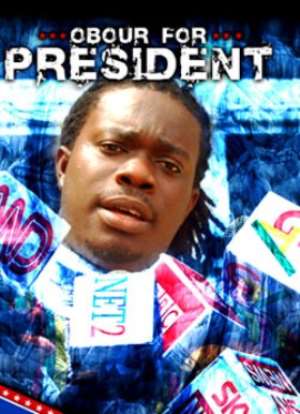 
The fifth President of the Musicians Union of Ghana would be named among these candidates: Gyedu Blay Ambolley, Obour, Nana Tuffour and Willi Roi - on August 18, 2011 in Tamale at the 5th National Congress of the Union, MUSIGA has announced.

And one of the favourites for the seat, top hiplifer, Bice Osei Kuffour a.k.a Obour thinks his eventual election to the highest position among Ghanaian musicians would result in an improved recognition and respect for the profession as well as contribute to improving the general standard of living of the musicians.

What would be his first plan of action should he become the one Mrs. Hopeson hands over the mantle to in late August, the king of social responsibility projects said, “First and foremost Madam Hopeson has started a large number of positive projects that I think requires continuation, I would ensure they are so furthered.”

Obour was however quick to add that “don't get me wrong, four years cannot solve all the problems of musicians but we can solve certain critical problems that can lay positive foundation to finding ever lasting solutions.”

Obour who chalks his tenth year in professional music business with six albums to his credit, has since 2008 been working closely as the MUSIGA Youth Organiser under the current MUSIGA President, Mrs. Diana Hopeson.

“And I can be proudly associated with a major success Mrs. Hopeson has chalked in improving unity among musicians. In the past few years I have been part of the mobilization of, especially the youth, to various MUSIGA activities. So far, I will rate the MUSIGA Unity level at 55%, and hope to improve this to over 90% within my first term in office.

“I have plans to ensure that in the short to long [term], musicians are recognized and respected when in Ghana, traveling out of Ghana or working abroad. As a young musician myself, who is very close to most of the musicians, I know most of our pressing problems and would be in the best position to learn even more and help solve them. I believe musicians, dominated by the youth, would find [it easier] (among my other candidates) to approach their young president to discuss and suggest solutions to making their lives better,” he said.

“Music business in Ghana itself is drastically in the down surge,” the CEO of family Tree Entertainment, one of the most active music labels in Ghana - reiterates and continues: “though MUSIGA is not directly in the business of interfering with individual businesses of musicians, I think that a lot of the people interested in joining or investing in this business of music need to be educated on how it works effectively.

"I have plans to activate on quarterly basis, Proactive Seminars to be run by people who understand the business and have proven track record to help so-called record labels add some professionalism to our business. Quality communication would be a priority and that's why a journal/periodical for the association would be launched and our website would be effectively run with updated database of MUSIGA membership.”

Obour who claims to be in touch with people with solid know-how of the industry would, when elected president, open a special office to support the industry (especially record labels) in ways of doing this business professionally to attract more people.

“Musicians would then take their business much more seriously instead of like a hobby" he said, adding "also, I have a few people in high places and would now be in the position to lobby to get support from both private and Government.”

“With a unified front and creditability, we will then be able to re-forward our case to the financial world who would then have trust in us to help create products to support the industry”, he said. Also a unified front will aid our collective bargaining. We will be able to demand better rewards for our services and better policies from government.”

Since he announced his intention to stand for election, Obour said “I have had plenty assurances from a large number of musicians who have pledged to support my presidency and together help build a successful front beneficial to all, in the shortest possible time. Ghanaian Musicians at home and abroad would be encouraged to join the association to move it forward. A full content of my plan will be outlined in the coming weeks.”

Whether Obour would be able to make his dream of helping improve the industry come to pass depends on the decision of over 130 delegates in Tamale on August 18. Obour returns to Ghana on June 16, 2011.