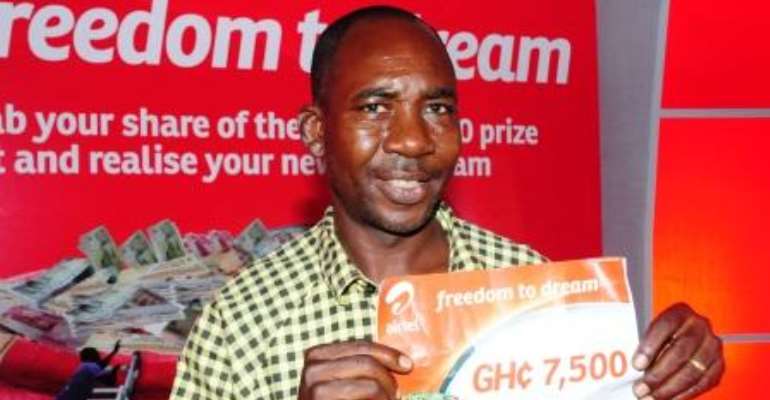 A lecturer from the University of Ouagadougou, Dr. Balibie Sergie Bayala and seven others have won various sum of cash prizes in the ongoing Airtel Freedom to Dream promotion. The highest among the eight, Dr. Bayala walked away with a cash prize of GHC 10,000 to enable him achieve his aspirations.

The eight emerged the luckiest of a total of 33 winners during the first weekly draw which qualified them to enter the second phase of the promotion- the Money Show- held on Tuesday, February 8, 2011.

Dr. Bayala said “It will take me some time to come to terms with what is happening. I used my Airtel SIM whilst on a visit in Ghana without any conscious effort to be part of the promotion; I am pleasantly surprised”.

“I appreciate the importance of education hence the continued effort to give my children the best form of education. I can see this dream materializing having won this huge amount”, he noted.

Jackson Alhassan, a UK-based businessman, currently working on a project in Accra, also walked away with GHC7,500 while Atta Aba Atta-Quayson of the Ghana Law School; Adams Kwewukume, a driver from Accra and Ware Nana Kweku Gyembi of the University of Ghana won GHC 5,000 each to enable them realise their cherished dreams. The rest were Abraham Botchway, a sales supervisor with Ayrton Drugs; Patrick Forson and Rasse Atala from Kumasi and Accra respectively who won GHC 2,500 each.

Linda Narh, Brands Communications Manager, Airtel Ghana said “We are motivated to do more when we realize the impact we are making in the lives of our customers and Ghanaians.”

She said “Although the journey has just begun, we have started achieving the core objective of giving our customers the freedom to do more and the clear manifestation of the reaction of the winners during the show is an indication of the positive impact this promotion will have on the lives of our customers”.

Every week, 33 winners are drawn from the FTD database of entries. The first fifteen (15) each win brand new Nokia phones with one year free airtime while the next ten (10) walk away with GHC 500 each. The last eight- the ultimate prize winners- get the exclusive opportunity to enter the Money Show to pick their preferred pot out of the 64, each containing a cash prize ranging from GHC2, 500 and GHC25, 000. This will be repeated every week as the number of pots reduces until the last one is picked at the end of the promotion.

Winning is easy with Airtel, remarked. New customers join the promotion upon the activation of a new SIM card and this comes with one entry. Afterwards, they gain entries, just as existing customers do, for a minimum recharge of GHC2. Customers also gain entries for every GHp 5 airtime usage within 24 hours, he stated, adding that “highlights of the promotion is currently running on selected TV stations between 4pm and 8pm.

Akufo-Addo, Ken Take Ghana Back To HIPC – Mahama
29 minutes ago