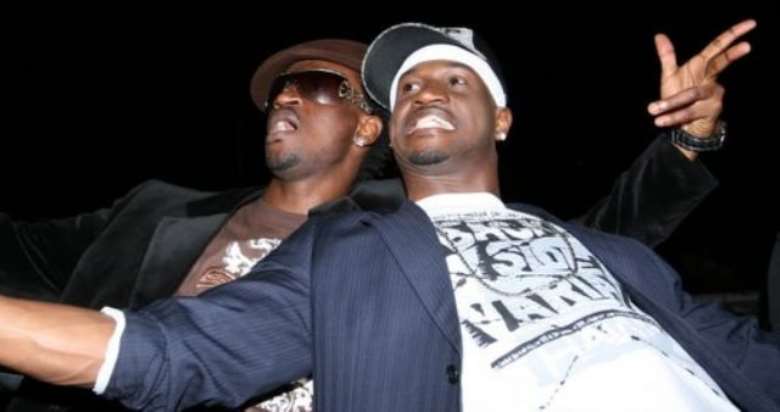 The Nigerian music industry has once again proved to be a major force to reckon with as one of its products, P-Square, emerged African Artiste of The Year at KORA All Africa Music Awards held at Ouagadougou, Burkina-Faso, on Easter Sunday, 4 April, 2010.

While the award ceremony was on, P-Square was in Troxy, London, performing at a concert; having commenced its tour of Europe few days earlier.

The award plaque and cash reward were received at the event by President Compaore himself, who described the Nigerian singers as the next African export as far as music is concerned. He however presented the award to P-Square at his Presidential Villa on Monday, a day after the event.

Shortly after the award, a private jet was sent by the organisers to pick P-Square and its crew from London to Burkina Faso, where an after event concert was staged at the Ouagadougou Stadium.

Surprisingly, the Burkina Faso fans sang along with the Nigerian stars, who rendered hit songs from their albums, including the debut, Senorita. Immediately after their performance, P-Square was taken round the Ouagadougou stadium amid tight security by the President and his aides.

Their elder brother and manager, Jude 'Engees' Okoye, also won the Best Video category with Do Me, one of the hit tracks in their third album titled Game Over. Jude smiled home with $20,000 [N3million] as cash prize attached to the award.

As the names and nominees were reeled out at the last Burkina Faso held KORA Awards, Edo State born reggae King Wadada never thought in his wildest dream that fortune could come his way.

Although, he was in Ouagadougou, the Burkinabe capital as a nominee, he figured he stood no chance against the back ground of first class videos produced by his rivals in the Best Reggae Artiste category. Compared to his rivals, his video was the cheapest and the quality almost zero.

But on a night the gods seem to be on his side, he heard his name called out, not only as the Best Reggae Artiste, in addition, he was getting a whooping $20, 000 for his effort.

Did he scream out his excitement? No. Wadada said in a telephone interview moment after his victory.

"I calmly walked up to the podium, lifted the plaque and dedicated the award to the Lord Jesus Christ who is the greatest thing to have happened to me. I was too excited to think of anything else. It was the greatest moment in my life and I thank God for making it possible."

While sharing his experience in the country Wadada said, " I was the local who went to KORA with the cheapest video, but today I am a hero."

Wadada, who also entertained at the event, disclosed that "although I didn't rehearse with the band, they shocked me with the speed with which they were able to pick my keys. The moment my fingers touched the guitar strings, they came on hot as fire and together, we thrilled the audience with heavy doses of reggae music."

On the prize money, Wadada affirmed that the organisers had promised in the presence of his lawyer Festus Keyamo to present the cash to him in Lagos at an elaborate occasion.

They were part of the lucky 36 chosen from a multitude ofmusic talents which attended auditioning across the nation. They spent about four weeks at the prestigious Star Fame Land. There, they formed their band, horned their music skills, composed their own music and contested against five other bands.

Ace Vibes, Spotlight Crew, Hurricane, Oxygen and Sapphire Blue. For 21 days, they showed their skills on National and Cable Television and were watched by audiences across the world. They go by the name Juke Box, led by Eghosa Frank whose performance on the drums is a delight to watch, any day, any time.

Other members include enigmatic Joshua Itietie, also a unique piece in this band, with a special skill of rapping with the lead guitar, way beyond imagination; Ogun State born Agunpopo Josephine Olamide blessed with a powerful voice, and fine-looking Wilson Emeka are vocalists of international standard with good dancing skills. The gentle Epanty Gregory plays the keyboard with a flourish while Asindi Sam is a wonder to watch on the bass guitar.

They were the choice of Nigerians, Africans and other TV watchers across the globe last Saturday April 3rd, as Star Quest, the music talent hunt sponsored by Nigeria's favourite lager beer Star, came to an exciting end. Some have described them as talents blessed with creativity that suits their name. Others say everything music resides in this band. They beat Ace Vibes and Sapphire Blue to the second and third positions respectively. Jukebox takes over from The Pulse Band which won the competition last year and has been ruling the airwaves with their song "So Tey" whose remix was done with Busta Rhymes. Jukebox has won for themselves N7.5m recording contract, N3.6m cash, a brand new mini van, one year guaranteed accommodation in Lagos and appearances in all Star lager organized events in 2010, including the popular 10 city- music- concert tour called Star Trek as well as the prestigious international music concert Star Mega Jam later in the year.

Latest Photo Reports
Catch up with all the political quotes from our politicians.
Advertise here
More Industry News
ModernGhana Links
Wildaland: Davido, Stonebwoy, R2Bees and over 20 top acts set to headline Africa’s “Glastonbury”
Yvonne Nelson wins GH¢500,000 defamation case against Mona Gucci
Ghana is seriously sick, the system are annoying and our leaders are stealing us – Kumchacha
Kweku Darlington claims he's rich enough to buy anything he wants now after Tim Westwood
P-Square must thrash out their past or risk splitting again – says Niibi Klala
20year-old video vixen, Whitney reveals how she got her $20,000
Kumasi theatre will be completed by end of next year – Okraku-Mantey
Nigerian star Joeboy, Reveals The Secrets behind hit song Alcohol, rise of Afrobeats and culture
[Video] My BP shot up when Peace FM disrespectfully sacked me from their entertainment show — Fredyma
TOP STORIES

Covid-19: Headache, body pains show the vaccine is working i...
16 minutes ago