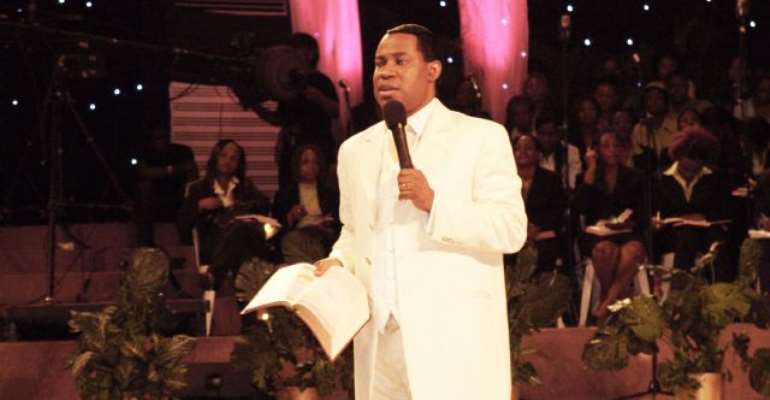 Christ Embassy Church in Lagos, South-West Nigeria, is being turned into show business as members were made to part with N1, 000 each as gate fee before they could enter their church to attend the New Year's Eve service, P.M.NEWS can reveal. P.M.NEWS confirmed that only members who could afford the N1, 000 gate fee were allowed into the premises of Christ Embassy Headquarters at Oregun, Lagos, where self-styled cleric and business man, Pastor Chris Oyakhilome, preached on 31 December 2010.

Indigent members who could not afford the N1, 000 tickets, were denied access and sent back by security men at the gate, it was learnt. The church, a source said, realised about N25 million from about 25, 000 members who bought the tickets. It was gathered that the church informed its members that it decided to impose a gate fee to control the huge crowd that always besiege the church on the New Year's Eve church service.

“Pastor said that to control the crowd and only allow genuine members who could do anything to be in church, it was good to pay a gate fee. Last year for instance, even senior pastors in the church could not secure a seat in the church on New Year's Eve service,” our source said. The ticket, bought by our correspondent, was still on sale today, five days after the New Year's church service took place.

A copy of the ticket has the following information printed on it: “one service…different locations worldwide impact! Time: 7 pm, Venue: Loveworld Convocation Arena, N1,000, December 31st New Year's Eve Service With Pastor Chris.” There is also a bold picture of Oyakhilome wearing one of his flashy suits. On the background there is a huge crowd in adulation of the man who once boasted that he will never be broke in life.

At the back of the ticket is a bold inscription : “ This ticket admists one person.” The development, described as scandalous by those who got a glimpse of it, is unprecedented in the history of Christianity in Nigeria. In the medieval period, similar scandals led to the break-away of Martin Luther from the Catholic church. This led to the formation of the Protestant movement.

The latest scandal in Oyakhilome's church comes only weeks after he appeared before the Economic and Financial Crimes Commission, EFCC, to answer questions on money laundering allegations. According to TheNews magazine edition of 13 December 2010, the alleged laundering of $35 million by Christ Embassy was traced by the Economic and Financial Crimes Commission with the help of foreign partners.

The magazine reported that Oyakhilome and money have had a bitter-sweet relationship. While money has brought him a lush lifestyle: an eye-popping auto collection, a movie-star wardrobe of stylish suits and choice properties that include a stunning church auditorium, it has also brought him an arm-long list of scandals.