I poisoned my husband because I hated him ─ Beninoise woman 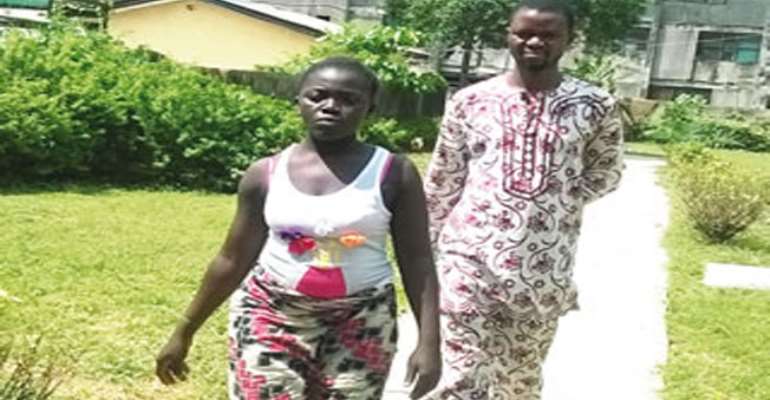 Seventeen-year-old Beninoise woman, Abiodun Ojo, who killed her husband, Jimoh, in the Makoko area of Yaba, Lagos State, has said she poisoned her husband because she hated him.

Abiodun, during an interview with PUNCH Metro, blamed her father for forcing her to marry Jimoh, who she said never took care of her.

She said she had run away from the deceased three times, and was sent back by her father, who she described as the architect of her problem.

PUNCH Metro had reported that Abiodun had been handed over to Jimoh as wife by her father to stop her from marrying her boyfriend.

She was said to have given birth to a baby girl, Hannah, and was living with the victim in their home on Apolo Street, Makoko.

However, she was said to have met her former boyfriend's elder brother, Wensu, who allegedly gave her the poison to put in Jimoh's drink so she could marry his younger brother.

Our correspondent reported that Jimoh, a carpenter, who was retarded, had returned home from work on June 19, 2015 when his wife poured the poison into his soft drink and forced him to drink it.

The deceased was said to have collapsed and died despite spirited efforts by residents to resuscitate him.

Abiodun, who initially denied involvement in the crime, later confessed to community leaders, saying she was given the poison by her former boyfriend's elder brother, Wensu.

The two suspects were said to have been arrested by policemen from the Adekunle Police Division and were subsequently transferred to the State Department of Criminal Investigation.

Abiodun said she never knew the poison would kill Jimoh.

She said, “I was born in Lagos, though I am from Cotonou, Benin Republic. My father married two wives and he had nine children. My mother had six children for him and I am number four. I did not go to school because my father did not allow me.

“I had a boyfriend, Papa, whom I dated for two years. I wanted to marry him, but my father refused because my elder sister was married to Papa's brother.

“I was at home one day when my father brought some people and said I should look at all of them and say if I liked them, and I said yes. He then asked me to go. It was the next day that they took me to Jimoh.”

She said she was taken to a community in Ogun State, where the victim usually came to make love with her until she became pregnant.

She said when she returned to Lagos, she was not well treated by the deceased and she complained to her family members, who asked her to endure the hardship.

“On three different occasions, I ran away from home. But whenever I got home, my father would ask me to go back, saying marriage was always full of challenges.

“On the fateful day, I went to the market to buy fish for my sister-in-law when I saw Wensu on the road. He gave me the poison and said I should put it in my husband's drink. I put it in his drink and he took it himself,” she added.

She said she regretted marrying the deceased because she never loved him.

It was learnt that the boyfriend, Papa, had travelled back to the Benin Republic.

His elder brother, Wensu, a herbalist, denied giving Abiodun the poison, saying she framed him up.

He said, “I am a herbalist by profession and I was taught the job by my grandfather in the Benin Republic when I was a child. I met her sister in the community and we married legally. She had three kids for me.

“But when I married another woman, she divorced me and married somebody else. I did not give her any poison and I have never met her husband, Jimoh, in my entire life. She is lying.”

The Police Public Relations Officer, Kenneth Nwosu, said the suspects would soon be charged to court.