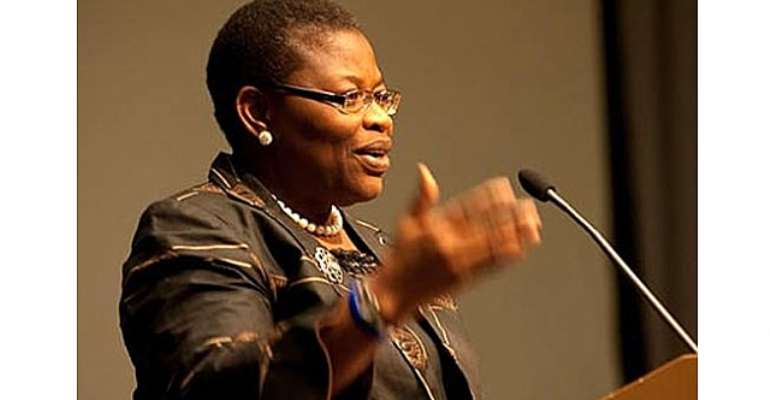 By CLIFFORD NDUJIHE
FORMER Education Minister, Vice President of the World Bank and Co-Founder of the Bring Back Our Girls campaign, Oby Ezekwesili, picked holes in comments that her campaign to rescue the over 200 Chibok school girls, who were abducted 100 days ago by Boko Haram insurgents is political.

Nigeria needs to shun habit of not doing anything concrete in the face of tragedy – Ezekwesili -Speaking on BBC interview programme, Hardtalk, she said she was driven by inertia on the part of government to take decisive action to rescue the girls.

Noting that her campaign has called local and global attention to the plight of the girls, Ezekwesili said there was need for Nigerians to react decisively as a people to rescue the girls.

Asked if her campaign was not political and amounted to psychological terrorism, the former minister said she was surprised that the presidency spoke that kind of language because “we have never been political” and people in the campaign are mothers and people who are genuinely aggrieved that the girls were abducted.

Told that she caused the government to characterise her as being political when she accused them of being evil, and that she was hobnobbing with leaders of the opposition All Progressives Congress (APC), Ezekwesili said she does her things with analytical evidence. Besides, she said those in the campaign are not connected by political affiliation but a bond of shared humanity.

Insisting that the campaign has not been politically manipulated, she said there is need for the country to shun the habit of not doing anything concrete in the face of tragedy and moving on as if nothing happened.

“I don't understand the politics aspect. I have never been a politician. I was a minister in a presidential system of government, not a parliamentary system where I have to stand for an election to be a minister. I have never been in politics. Former President Olusegun Obasanjo will laugh his head off each time he hears that characterization of me,” she said.

On whether negotiation or the military approach should be used to rescue the girls, she said the government, with better information, is in a better position to know the best approach.

No matter the option chosen, she said there is need for a window to begin a dialogue and no option should be dismissed.

“There could be combination of solutions. The one with better information is in a position to come up with a combination of options. What I don't like is no action… I feel today, there is need to avoid every form of inertia.”

Asked if she is in support of prisoners' swap to free the girls as demanded by Boko Haram, she said she is not prepared for that kind of outright approach but is prepared for a multi-action approach.

On whether she agrees with the notion that Nigeria is a failed sate, she said: Nigeria is not a failed state. Nigeria has the problem of failed institutions. Some of the institutions have not operated at their optimum because of bad governance.”