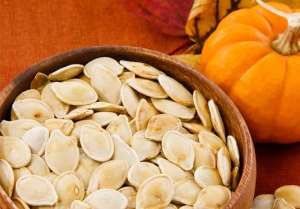 1. They're high in the sleep-enhancing amino acid tryptophan that converts to serotonin in your body and helps ensure a good night's sleep;

2. They're also high in the heart-healing mineral magnesium, which is also Nature's natural relaxant;

3. They're high levels of easily-digestible protein helps stabilize blood sugar when eaten as a snack throughout the day. Stable blood sugar means weight loss if you're trying to lose.

4. High in Omega 3s, pumpkin seed oil has been shown in studies to reduce the incidence of benign prostatic hypertrophy (BPH)—a condition in which the prostate gland becomes enlarged.

5. Pumpkin seeds are also high in the prostate-protecting mineral zinc, making these seeds the ultimate snack for men's health.

6. They're a good source of blood-building and energy-boosting iron.

7. In animal studies, when pumpkin seeds were added to the diet, the anti-inflammatory results were comparable to the effectiveness of the drug indomethacin—without the side-effects.

8. Their phytosterol compounds are believed to lower cholesterol levels. Of nuts and seeds, pumpkin seeds have the second highest amount of sterols (next to sunflower seeds and pistachios which tied for first).

9. Pumpkin seeds are an excellent source of fiber which helps keep you regular.

10. They are alkalizing to the body's pH. Many snack foods are acid-forming in the body. Acidity has been linked to pain, illness, and even cancer.

To preserve the health benefits of the oils found in pumpkin seeds, eat them raw or roast them on a baking sheet on low heat in the oven (about 170 degrees F or 75 degrees Celsius) for 15-20 minutes. Toss with a sprinkling of sea salt and enjoy. If you haven't tried them warm, you're in for a real treat! Add raw pumpkin seeds to salads, dips, or ground in pesto.

Pumpkin seeds were discovered by archaeologists in caves in Mexico that date back to 7,000 B.C.

North American tribes were the very first to observe the particular miracle in pumpkin seeds. Pumpkins and their seeds were an important Native American Indian food used for their dietary and medicinal properties.

Pumpkin seeds are called pepitas in Mexico and they are a trademark of Mexican cuisine.

Pumpkin seeds were very popular in ancient Greece.
The nutrition in pumpkin seeds improves with age; they are among the few foods that increase in nutritive value as they decompose. According to tests made at the Massachusetts Experimental Station, squash and pumpkin seeds stored for more than five months show a marked increase in protein content.

Pumpkin seeds are high in calories, about 559 calories per 100 g.

Are filled with lots of minerals including phosphorus, magnesium, manganese, iron and copper.

Are a good source of vitamin K.
Contain phytosterols, compounds that that have been shown to reduce levels of LDL cholesterol.

Contain L-tryptophan, which helps with good sleep and lowering depression. Tryptophan is converted into serotonin and niacin. Serotonin is also very helpful in helping us to have a good night's sleep.

Are high in zinc, making them a natural protector against osteoporosis. Low intake of zinc is linked to higher rates of osteoporosis. In a study of almost 400 men (age from 45-92) published in the American Journal of Clinical Nutrition they found a correlation between low dietary intake of zinc, low blood levels of the trace mineral and osteoporosis at the hip and spine.

Are the most alkaline-forming seed.
Are an excellent source of vitamin B group (thiamin, riboflavin, niacin, pantothenic acid, vitamin B-6 (pyridoxine) and folates).

Reduce inflammation for arthritis without the side effects of anti-inflammatory drugs.

Are used in many cultures as a natural treatment for tapeworms and other parasites.

Are good for prostate health! The oil in pumpkin seeds alleviates difficult urination that happens with an enlarged prostate.

Pumpkin seeds have long been valued as a source of the mineral zinc, and the World Health Organization recommends their consumption as a good way of obtaining this nutrient. If you want to maximize the amount of zinc that you will be getting from your pumpkin seeds, we recommend that you consider purchasing them in unshelled form. Although recent studies have shown there to be little zinc in the shell itself (the shell is also called the seed coat or husk), there is a very thin layer directly beneath the shell called the endosperm envelope, and it is often pressed up very tightly against the shell. Zinc is especially concentrated in this endosperm envelope. Because it can be tricky to separate the endosperm envelope from the shell, eating the entire pumpkin seed—shell and all—will ensure that all of the zinc-containing portions of the seed will be consumed. Whole roasted, unshelled pumpkin seeds contain about 10 milligrams of zinc per 3.5 ounces, and shelled roasted pumpkin seeds (which are often referred to pumpkin seed kernels) contain about 7-8 milligrams. So even though the difference is not huge, and even though the seed kernels remain a good source of zinc, you'll be able to increase your zinc intake if you consume the unshelled version.

Hottest Photo Reports
Catch up with all the political quotes from our politicians.
Advertise here
More from Home & Food
ModernGhana Links
Top 5 affordable Ghanaian dishes to buy online in 2022
4 cheap foods for a perfect lunch meal in Accra
Food and Cancer
TOP STORIES