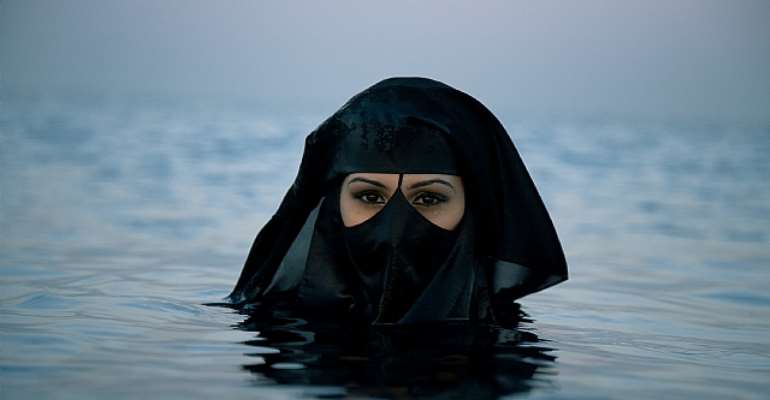 The image is based on one of my very first experiences in Saudi Arabia: With the naked beaches of Barcelona a not too distant memory... I headed down to the Arabian Gulf for a dip. There, I became mystified by something black and obscure out at sea. It looked like a huge jellyfish. Then, as it approached, I realised that it was in fact a woman.

It was such an intense experience that I just had to capture it for myself. However, it was not until a few years later in Dubai, when I had acquired the equipment and expertise necessary, that I was able to execute it. Anyone trying to take a picture like this in Saudi Arabia, would run the risk of ending up in prison, so in the more liberal country of the UAE I was able to realise it.

It actually took me a year to find the right lady. Yes, there are lots of women with beautiful eyes in the Emirates, but finding an open-minded enough one to do it, now that was a challenge!

The picture itself was taken at dawn on the Burj Al Arab beach. I chose that time, because I wanted extremely soft light to fall on her and the sun to reflect in her eyes. It was winter, so the sea was freezing and we were both deep into it. It was an incredible experience. The model and I had only met a couple of times prior to the shoot so we actually got to know each other as it went on, finishing with a nice hot chocolate on the beach afterwards.

The photo is entitled An Emerging Mystery and I feel as though it is extremely symbolic of muslim women's increasing prominence in the world, despite a continued mystery. The Saudi veil is so often portrayed negatively in the West that I hope to counteract that somewhat and prevent the Western public from being mislead. Many muslim women actually choose to wear it and I am more than happy to respect that.

The image marks the beginning of a project that I have been wanting to carry out for some time. All we ever hear about Saudi Arabia seems to be negative, where as having lived there for 3 years, I can assure you that the reality is quite different. In fact, there are many things that we westerns could actually learn from them. I really admired and enjoyed the strength of their friendships, the closeness of their families, their sense of humour and how friendly and generous they are. With this and other images I would like to try and redress the balance a bit and produce a book reflecting the more magical aspects of the kingdom.