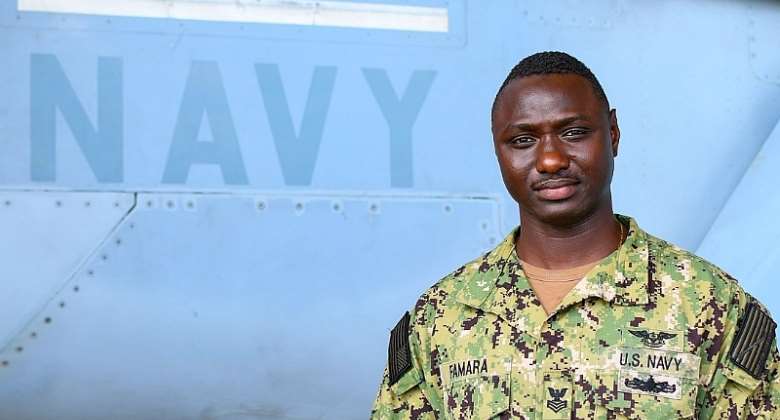 Touray Famara, a 2008 graduate of
DeYoungster’s International School in Accra, Ghana; serves the U.S. Navy as an aviation structural mechanic assigned to Strike Fighter Squadron 106 in support of the F/A-18 Super Hornet.

Famara joined the Navy 12 years ago after he finished two years at a community college in the U.S.

“I joined to make money and to travel. serving means I am able to support my family, it's a steady paycheck. In eight more years, I’ll be able to retire and get a steady paycheck for the rest of my life.” Famara stated in a press note from Navy Office of Community Outreach to DEL REPORT.

According to Famara skills and values he acquired while growing up in Ghana has helped him to succeed in the Navy. “My mom taught me to be respectful to my elders. That has always applied to situations in the Navy and it has turned out very well for me."

The Super Hornet is one of the most advanced aircraft in the world, according to Navy officials. It takes off from and land on Navy aircraft carriers at sea and is capable of conducting air-to-air combat as well as striking targets on land.

Navy aircraft carriers are designed for a 50-year service life. When the air wing is embarked, the ship carries more than 70 attack fighter jets, helicopters and other aircraft, all of which take off from and land aboard the carrier at sea. With more than 5,000 sailors serving aboard, the aircraft carrier is a self-contained mobile airport.

Aircraft carriers are often the first response to a global crisis because of their ability to operate freely in international waters anywhere on the world’s oceans.

The aircraft carrier is the U.S. Navy's centrepiece, flagship and a constant reminder to the rest of the world of the enduring maritime presence and influence of the U.S. Navy.

Serving in the Navy means Famara is part of a world that is taking on new importance in America’s focus on strengthening alliances, modernizing capabilities, increasing capacities and maintaining military readiness in support of the National Defense Strategy.

“The Navy has maritime support and security,” said Famara. “It trains and equips people like me to be combat ready. This makes us ready to face any threats to national security.”

With more than 90 percent of all trade traveling by sea, and 95 percent of the world’s international phone and internet traffic carried through fiber optic cables lying on the ocean floor, Navy officials continue to emphasize the importance of accelerating America’s advantage at sea.

For his part, Adm. Mike Gilday, Chief of Naval Operations said: “Maintaining the world’s best Navy is an investment in the security and prosperity of the United States, as well as the stability of our world. The U.S. Navy—forward deployed and integrated with all elements of national power—deters conflict, strengthens our alliances and partnerships, and guarantees free and open access to the world’s oceans. As the United States responds to the security environment through integrated deterrence, our Navy must continue to deploy forward and campaign with a ready, capable, combat-credible fleet.”

The Navy Office of Community Outreach in Millington, Tennessee, USA travels around the globe to collect photos of sailors, to share with their hometown media.