Impacting lives through e-commerce, the story of a young delivery agent in Accra 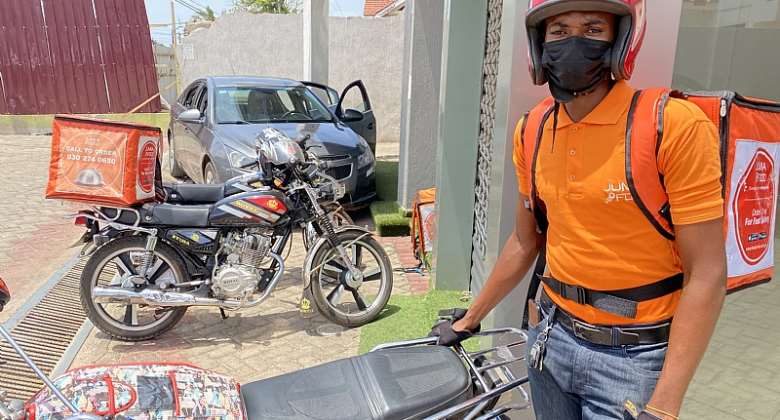 Once upon a time in a small town in Ghana, there lived a young brilliant boy with big dreams and aspirations. Running around the village on multiple errands for both his parents and other elderly people, this young boy developed a passion to serve other people in order to make their lives easier and more comfortable.

When no one was ready to go on an errand, Charles would gladly take the money and run through the muddy streets just to get that item from the shop and deliver it to the sender.

He studied hard and went through basic school picking up several skills and training. After basic school, he encountered some challenges funding his secondary school education which left him very frustrated. He started several businesses which sustained him for sometime before eventually, he had to move from his hometown to ‘’hustle’’ in the city.

Once in the city, Charles had a vivid plan. The plan wasn’t just to make money but to play an active role in making the lives of everyone easier and better while living his dream of serving mankind. His love and desire to impact other people’s lives spurred him on from one business to the other. Charles was not just here to make money but to follow his passion.

A few weeks after settling in Accra, he met a friend who was into the famous ‘’okada’’ business.

This friend transported people on his motorbike through short distances at a fee. Charles recounts having to learn how to ride a motorcycle within 4 days because his friend with whom he lodged refused to give him food if he didn’t join him in making money. After a few days, Charles joined the ‘’okada’’ business and would go to work on the days when his friend was off.

This system worked for a while till the motorcycle broke down. Frustrated and with limited options, Charles thought of going back to his hometown. He packed his belongings and headed for the lorry station. There, he saw a rider with a big orange box delivering food to a passenger at the transport yard. The way this rider was dressed and well-branded caught his eye and he decided to approach him.

After a few questions, Charles changed his mind and decided to stay in Accra to give this a try. The rider introduced him to Jumia Food and he was trained. He was fortunate to be accepted into a courier company and given a motorbike and the necessary logistics to begin work. He worked so hard and after a few months saved enough to buy his own motorbike.

‘’I deliver parcels and packages to customers' homes and offices. Delivering food from customers' favorite restaurants to their doorstep within minutes is very fulfilling. The smiles on their faces give me so much satisfaction. During the Covid-19 pandemic, I am happy I was able to play my part by delivering essential items to customers' homes and offices to reduce the spread of the virus. Working with Jumia has really helped me. I am able to take care of myself, I support my family and I am even saving money to further my education’’ said Arkah Yamoah Charles, Delivery Agent at Jumia Ghana

Today, just like Charles, there are many individuals who are working hard and impacting the lives of Ghanaians through e-commerce. Online retail and on-demand services have created massive opportunities for a lot of Ghanaians to make an income, support their families and pursue their dreams.

Latest Photo Reports
Catch up with all the political quotes from our politicians.
Advertise here
More Career & Money
ModernGhana Links
Five Great Ways to unlock the next wave of growth in Your Small Business/ Start-Up in 2022
5 Important Things Every BECE Candidate Should Know
Pregnant Fish
Give Women More Top Roles in Hospitality and Tourism, says Jael Agyei Akyeampong
Pay based on performance motivates employees – unless people think it’s unfair
Best Practice for Remote Working and Collaboration
Getting attention on Facebook
Saving Money in a pandemic era; the role of online shops
Consider These 8 CV & Resume Mistakes When Applying For Jobs
TOP STORIES