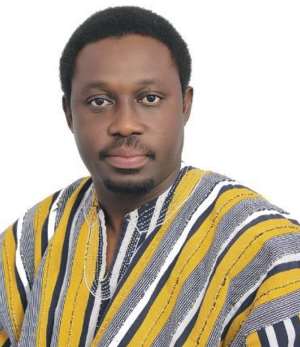 In the Ghanaian academic parlance, a "shark" is a commonly used term that refers to someone who is exceptionally brilliant and usually comes atop in his/her class in terms of academic performance. Sharks usually pass their examinations with distinction to the admiration of their colleagues, teachers, and all well-meaning school authorities. Such was the caliber of Hon. Anthony Mwinkaara Sumah during his days in school.

Hon. Anthony Sumah had his elementary and basic education at Jirapa where his father worked as a civil servant, attending St. Anthony’s Primary School and St. Augustine’s JHS basic respectively. After excelling in his class as the best graduating

student from St. Augustine’s JHS he proceeded to the Lassia Tuolu Senior High School and again graduated as the overall best student of his year group. Owing to his stellar performance, the school authorities assigned him a teaching role as a pupil-teacher at the Lassia Tuolu Senior High where he taught mathematics and economics. Prior to this, He had a similar stint with Kanton Senior High School in Tumu, where he taught Economics. These attest to the high level of confidence the school authorities in both instances placed on his capacity and ability to teach and influence his colleagues positively.

From the Lassia Tuolu Senior High school, he gained admission into the University of Ghana, Legon, where he graduated with a first-

worked with the team to see infrastructural transformation within his tenure as hospital administrator. In 2011, He was reposted to the Tumu District Hospital to head the Health Service Administration and Support Service Department. His principled and result- oriented nature was immediately brought to bear as he led the hospital through some operational reforms aimed at enhancing the efficiency of service delivery. His status as the ever hardworking and principled administrator is an open secret in the Sissala East District and the Region as a whole.

Whilst at Post in Tumu, the workaholic Anthony Sumah found time to pursue a Master’s Degree in Public Administration at the Kwame Nkrumah University of Science and Technology, KNUST, in Kumasi, as a sandwich student. He again

graduated with distinction. From KNUST, he gained yet another admission to study Masters of Health Management and Planning at the prestigious University of Technology, Sydney, Australia. After graduating with outstanding performance, the University of Technology, Sydney made him a Research Assistant at one of its departments with an opportunity for a full-time engagement as is usually the case with exceptionally brilliant students. However, the ever-prudent Anthony Sumah turned down the opportunity to stay over permanently with an excuse that the exigencies of service back home meant he could not accept to stay in good conscience.

The newly-elected MP for Nadowli/Kaleo has also been a project consultant to other reputable Multinational Non-governmental Organizations such as the JiCA, the USAID, and JHPIEGO where he worked on projects such as the Development of Community Health Officers Training Materials, the JiCA Baseline Survey Project which focused on strengthening Community-based Health Services in the three Northern Regions, a review of the Facilitative Supervision Guideline as well as a review of the Collection of Best Practices in CHPS Implementation Guide project. He has also been a Resource Person in the execution of projects such as the Development of National CHPS Implementation Guideline among others. In terms of human capacity development, he is the lead resourceperson training community health officers in resource management. He also led the development of the first-ever Strategic Plan for the Sissala East Municipal Hospital.

The dynamic and determined health administrator has participated in several capacity building seminars and workshops that have further enhanced his professionalism, capacity, and demonstrable experience. Some of the workshops he has participated in include but not limited to the following: Executive Professional Certificate Course in Health Systems Management, Leadership, and Governance at Pentecost University College, Payroll Administration Training organized by the Controller and Accountant General Department; Training on the Amended Public Procurement Act by the Ghana Health Service, Training on Human Resource Management in the Public Sector organized by the Ghana Health Service; Training on Public Sector Financial Management organized by the Ghana Health Service; and Professional Project Management Training by Merger Technologies Limited. In the world of academia, the newly elected MP has 8 peer- reviewed publications to his credit with special interests in public health and community health development.

Figure 4 Then Candidate Sumah, mobbed by a crowd at a campaign event

After the right Hon. Alban Sumana Kingsford Bagbin expressed his desire not to run again, Anthony Sumah launched his bid alongside six other comrades to replace the colossus of a legislator. He faced stiff competition, but emerged victorious after the primaries obtaining 374 out of 852 votes, an obvious. Right after the primaries, the workaholic candidate set out to unify the rank and file of the party to ensure a resounding victory in the upcoming polls. He immediately reached out to those who contested him in the primaries in a move to unify the house for the greater task

ahead. The then Parliamentary candidate elect also reached out to almost all persons to bring reconciliation to the rank and file of the party as he inched closer to the polls. These moves coupled with, the unflinching support of the Right Hon. Alban Bagbin, party Executives, party big wigs in the constituency, and the strenuous efforts of the campaign team led to a landslide victory for the party in both presidential and parliamentary elections in the constituency. The new entrant, Anthony Mwinkaara Sumah faced competition from two veterans, the PNC’s Bernard Mornah and the NPP’s Elvis Botah. Just as in the primaries, the new entrant won the elections in a landslide obtaining 23,961

The MP-elect is a devout Catholic and by extension a quintessential gentleman. In his presence, you are welcomed to a charming aura of unassuming, attentive, and reassuring persona that makes you feel at home. He is hardworking, dedicated to duty, diligent, and disciplined. He is a results-oriented team player who gives everyone the benefit of doubt and opinion. He is a passionate development enthusiast who stops at nothing to help meet the needs of the people. He believes in the power of unity and champions it in all his daily interactions. He is eloquent, precise, and concise in diction; a perfect orator who is captivating to listen to. He is both culturally and socially sensitive to words, clichés, proverbs, and other expressions. He has absolute respect for culture and tradition and has endeared himself to the various traditional authorities across the constituency. This is the man, a fine gentleman by all measures whose name will be synonymous with Nadowli/Kaleo in Ghana’s Parliament for the next four years.