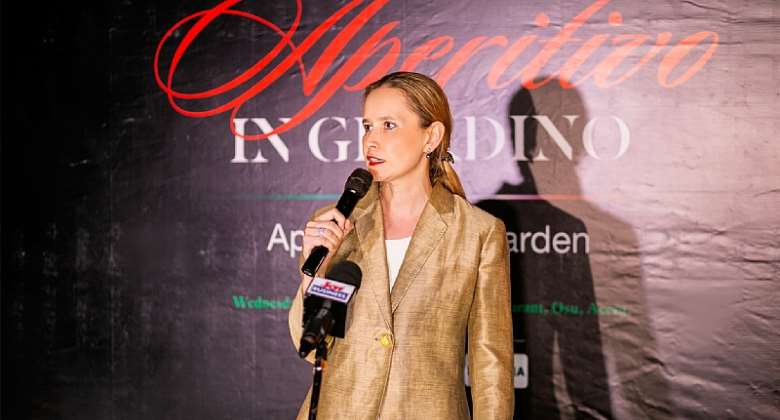 On 25th November 2020, the Embassy of Italy and the Italian Trade Agency (ITA) in Accra, in partnership with Imexco, Say Cheers and Pomona Restaurant at Osu, held an event ‘Aperitivo in Giardino’, (‘Aperitif in the Garden’). The event aimed at celebrating, on the occasion of the 5th World Week of Italian Cuisine, the rich culinary and wine culture of Italy and at creating an opportunity for Ghanaians to savor the rich and quality taste of Italian wines, which are reputed to be among the very best in the world.

Italy has been making wine for over four thousand years. Wine makers in the country have honed and perfected the art and science of its production, making it currently the largest producer in the world, with 1.1 billion gallons. Currently, some 1.7 million acres in the country are utilized for the production of wine, yielding an average of from 4.2 billion litres to 5.6 billion litres over the period from 2014 to 2019.

The wine industry is a key player in the Italian economy and one of its top foreign exchange earners, as the delicacy is savoured all around the world by connoisseurs and beginners alike. It is also naturally, an indispensable staple of local Italian culinary culture, and a pillar of the Mediterranean diet, which was declared an “intangible cultural heritage of humanity” by UNESCO.

Wine is produced in all of the country’s twenty regions, with variations corresponding with the local cuisines and local climates of these regions. 590 grape varieties have been identified in Italy, with hundreds more yet to be catalogued. Piedmont, Lombardia, Veneto, and Tuscany are among the major wine producing regions, responsible for globally acclaimed wines such as Barolo, Barbaresco, and Brunello di Montalcino. In recent times, Verdicchio, Sagrantino, Primitivo, Nero D'Avola, and others from South and Central Italy are also catching the attention of wine lovers while Chianti, Soave, Pinot Grigio, Passitos and Moscatos from various regions around the country have long been held in very high regard by connoisseurs.

At the turn of the 20th century, the Italian wine industry faced some threats to its survival, owing part to its insistence on high production standards. The implementation of a strict regime of regulation, labelling and authenticity standards, the most significant of which was the Denomination of Origin (Denominazione di Origine Controllata, DOC) Law in 1963. These initiatives ushered in a golden era of Italian wine production, with significant improvements to the quality of grapes used in the production of wine in the country.

Italy is now an undisputed leader in the field, responsible for about 29 percent of global production since 2017. Between 2017 and 2019, wine contributed €5.9 billion and €6.4 billion to the Italian economy. When the ancillary industries reliant on the wine industry – such as manufacturing, processing, marketing and tourism – are included, wine yields €10.6 billion a year, with an average increase of 5 percent annually. 1.3 million Italian jobs, directly and indirectly, rest on the Italian wine industry. Italy has also become a leader in Europe for organic vineyards.

Given its outsize role and the vast potential of the market, it is gratifying that the Italian wine industry, through the Italian Embassy and the country’s trade agency, is turning its attention to the Ghanaian market. Closer economic ties between the two countries, which takes account of the relative strengths of the two economies, can only be a good thing and wine is one of the ways in which those ties can be more tightly forged.

But there is more. As a country with a growing middle class, the Ghanaian market is a natural market for lifestyle products such as wines and the high quality and variety of Italian wines will be appreciated by local tastemakers. It will also help the tourism and hospitality industries which can take advantage and widen the range of refreshments available to punters.

The industry itself also has much that it can pass on to Ghanaian players in the agricultural sector. With many centuries of experience and innovation, the Italian wine industry has built systems and adopted practices that have led to successful agricultural yields for the benefit of Italian wine makers. While grape culture is far from ascendant in Ghana, there are surely transferrable skills that can be applied in the service of Ghana’s cash and food crop production systems.

Fittingly, “Aperitivo in Giardino” was held during the annual Italian Cuisine week, which celebrates and promotes the wider Italian culinary culture of which wine is an inextricable part. This event was a perfect example of the flourishing of cultural interactions between Italy and Ghana that can be of great benefit to both countries, not only culturally but also economically. And to that we can only say “cheers, bottoms up!” and recall the wise words of the multiple Oscar-winning film director, Federico Fellini, who once said: “A good wine is like a good film: it lasts an instant and leaves a taste of glory in your mouth”.

Latest Photo Reports
Catch up with all the political quotes from our politicians.
Advertise here
More Travel & Tourism
ModernGhana Links
A Trip to the Pool of Opportunities: Deborah Dagogo recounts how it all started
Maame Abena Akwetey, shows off the intricacies of Fort St.Anthony and calls for more local tourism
South African Airways to resume flights on September 27 after Covid-19 shut airport
Ghana High Commissioner opens up on difficulties of Ghanaians in South Africa
Abeiku Aggrey Santana takes Oral Ofori on a Heritage Tourism ride in Accra
Tourism will only recover if partners work together
Bank of Egypt supports tourism sector with $128 million
Traveling in COVID times? Ensure safety and follow the right safety measures
Royal Senchi, Others Recognised At Global Hotel Awards For Excellent Service Amid COVID
TOP STORIES