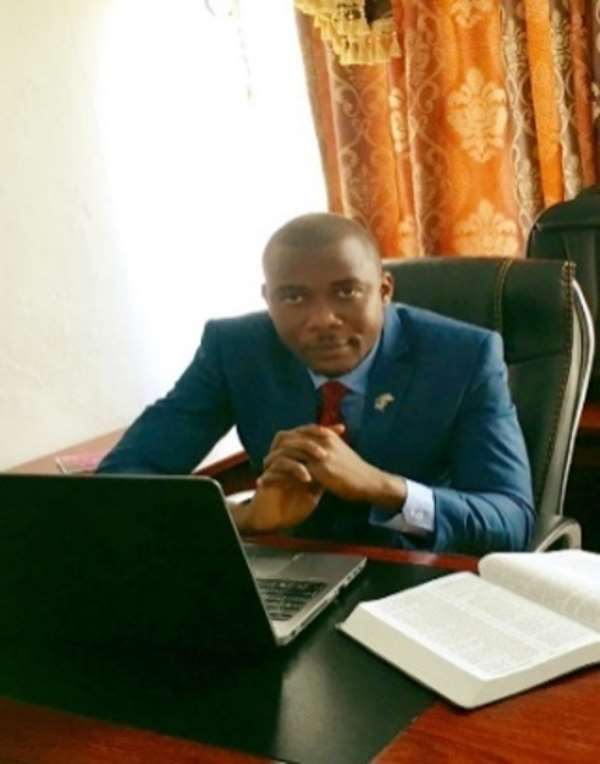 Born on September 20, 1983 in Liberia’s capital Monrovia, P. Edwin Tisdell is the last male child of Mr. Arthur F. Tisdell (who died while Edwin was at age 13) and Mrs. Beatrice N. Tisdell. Though Edwin came from a family whose only source of income rested on his father’s carpentry and masonry skills hence narrowing his parents to afford some basic childhood services to him and his siblings, he still singlehandedly fought against all odds to improve his life and to make a significant impact in his country.

During the civil unrest in Liberia, he and his elder brother, Wisdom Elijah Tisdell (now pastor) along with some friends fled to Ghana and later moved to Nigeria. In Ghana, Edwin forcibly became molding blocks in order to have meal and to save some money so that he and his brother could relocate to Nigeria where they think opportunity and less pressure would sneeze on them continuously. And so they hustled and moved to Nigeria in the quest for better life.

In Nigeria, young Edwin situation took another dimension. He and his brother, Elijah could not afford paying for even a tent but was again favored by God. Unlike Ghana where they were residing in a refugee camp, this time, they were fortunate to have seen a family they knew from Liberia—who latter provided accommodation for them. Again, there, Edwin became a houseboy and a study class teacher for a Nigerian family so as to enable him to quench his thirst: To go to school. He therefore used money earned from this work to attend Graphic Designing classes at a local computer training center. He believed that he can help bridge the gap between graphic designing and advertising since both fields will be more powerful when one has them combined, and the world is becoming more technological on a daily basis such that a Graphic Designer will be called upon by top-notch companies/entities.

Due to the civil unrest in his country, he and his elder brother got ex-communicated from family members and other relatives back home, but they both had one thing in the back of their minds: Stay focused and do everything positively to survive so that we can see our parents again once the war in our country ends. Indeed they were guided by this thought whilst in exile.

Upon their return, not knowing where to start from and also due to the prevailing Economic problem in the country by then,Edwin then decided to do a desktop publishing work at a local spot( the famous World Trade Center—Liberia’s version—where petty typists and desktop publishers go in search of their daily meal). While at this local hustling ground he had a bigger vision to one day have a company of his own. This vision and his unwavering thirst to place Liberia on the map graphically persuaded him in 2010 to establish CHAMPION DESIGNS & COMPUTER ACCESSORIES, now regarded as Liberia’s best designing and advertising company; empowering Liberians some of whom he personally trained.They (Champion Designs) advertise for top notch companies and businesses in the country with a plan to extend the company to neighboring countries—Sierra Leone, Ivory Coast, and Guinea. He went further by establishing other entities under the ‘Champion’ banner such as, CHAMPION’S FARM, CHAMPION’S PETROLEUM and CHAMPION’S MINI MART.

Currently, P. Edwin Tisdell is the Director General for City Beautification at the Monrovia City Corporation (MCC).He is described by many as one of the nation’s pride in the business sector. In some curves and corners, analysts and pundits refer to him as an ‘Unsung Hero’ who is an epitome of a visionary, pragmatic, and charismatic leadership style.

Education
Due to his thirst for education, Edwin had had series of certificates in varieties of disciplines both from Liberia and abroad most especially in the field of Information Technology (IT). He is a holder of a Bachelor of Arts degree in Accounting and Management from the University of Liberia.

Other works
Despite his portfolio and financial status in Liberia, P. Edwin Tisdell sees himself as one of those common/ordinary Liberians who owe a lot to his country. He thinks that the world can only be a better place if we all try to give back to the society we originated from. And so against that effect, he served as a Lab Supervisor/Dean of Students and also teaches Information Technology and its related courses at the YMCA in Monrovia—a job he enjoys so much even before entering national government where he is currently serving as the Director General, City Beautification at the Monrovia City Corporation (MCC). Prior to him establishing his advertising company (Champion Designs), he served in varieties of positions including a Corporate Graphic Designer, Print Equipment Supervisor, and Logistic Technician amongst others.

Personal Life
On November 29, 2012, P. Edwin Tisdell married his long time sweetheart, Hawa Benda (now Mrs. Hawa Benda Tisdell) and the couple is blessed with two (2) beautiful biological daughters; he is also a dad to six (6) others. The family currently lives in a mansion believe to worth around 43.62million Liberian Dollars in Marshall, Margibi County, Liberia. Lost his father, Arthur F. Tisdell, at the age of thirteen (13), Edwin grew up with a single-mother, Beatrice N. Tisdell along with seven siblings: Two brothers and five sisters. This had made him to create so much love for fatherless kids.He believes that being fatherless is a more orphanage situation than being motherless though both parents are essential to their kids.

He is a fanatic of glamorous cars thus leading him to have several to his disposal. He had made lots of business tours in many countries around the world including countries in Asia, Europe, Africa and the United States of America.

Tisdell is a fervent believer of Jesus Christ as the Lord and Savior. Currently he is an instrumentalist in the church he worships.

Socially, he is a lover of soccer and music (most especially Liberian songs). His wife, Hawa once said, “My husband loves Liberian music to the extent he gets vex with anyone who knowingly or unknowingly hits his musical equipment. He would get mad and one would think that huge money has just been stolen/missing from him. In fact, it appears like you have used a cartoon of invectives on him while on an occasion.Even in our bedroom, he won’t sleep without music playing softly. He tries knowing the lyrics of every newsong.His strength is music.’’

As part of his love for Liberian music and his unflinching desire to improve the Liberian Music Industry, he once managed a musical duo—SOULFRESH (JB and Shinning Man). During his tenure as manager for them, the group recorded several songs with videos and made their first ever international trip to Asia, precisely China.

P. Edwin Tisdell is also a humanitarian/philanthropist. He has helped and continues to help many underprivileged people including the aged, disabled, students, et cetera. He currently provides scholarships and financial aid to students ranging from primary schools to university level.

About the Author
M. Abdul GborgborKai Pabai is a Liberian and a student at the University of Liberia reading Economics and Political Science. He can be reached at email: [email protected] and contact: +(00231) 881510208/ 775167693 or facebook: M Abdul Pabai