Alert: Obesity, whose fault could it be anyway? 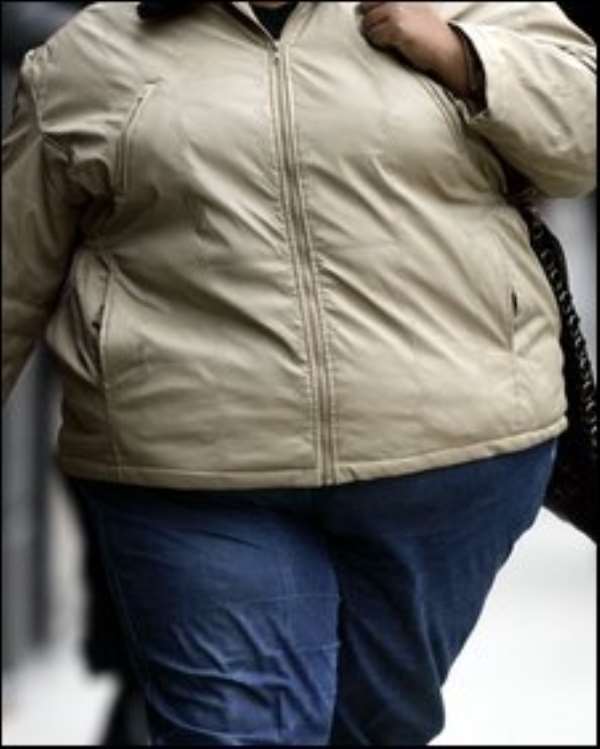 I had a conversation with a good friend on my recent return to Ghana. This gentleman had been promoted in his job and was doing well financially, and he was gaining adequate waistline to show for his success. He actually asked to have a chat with me and that got me nervous because he seemed serious about it, only to comment on my weight.

He was wondering if things are okay for me in the UK since my weight had stayed stable for well over five years. He did not understand why 'somebody of my position and prestige could be that lean' and was worried because most of our other colleagues come back home 'looking tough'.

It is reasonable to believe that my friend is not isolated in his position. In certain Ghanaian cultures, Obesity is seen as a sign of wealth and prestige. In fact, 'potbelly' or 'beer belly' which is medically recognised as the worse form of Obesity is adored by certain elite groups as proof of success and achievements.

It is incongruous to accept that in Ghana people with tertiary education are presented with the highest levels of Obesity compared with the less literate. It is also more prevalent in urban and high class residences than rural and low-class residences; observations that are also not in conformity with industrialised populations. It is therefore by no coincidence that we observe more chubbiness in the more successful individuals in the Ghanaian society. What is alarming is the fact that these are the same people who are supposed to inspire the next generation of leaders in the country. No wonder the canker is already being witnessed in some of the 'latter days' leaders.

Take a look at our modern day politicians, religious leaders, traditional rulers, businessmen, actors and actresses, radio DJs and presenters etc and what you see are individuals who are well content with their bigger frame. And these are the 'big men' in the society. How often do we see 'slim/ normal weight' actors made the bosses or the 'big men' in local movies? Perhaps that is a reflection on society, but it is also an indictment on our attitude towards our health and wellbeing.

Recently, a debate ensued in the UK media regarding the responsibility of chubby celebrities in promoting Obesity. As a practising dietitian in the UK, I followed this debate and the discussions generated therein with keen interest.

One can appreciate the assumption that by seeing our chubby 'role models' as often as we do on TVs and other platforms, it fuels the perception that Obesity is 'normal' in the eyes of the public. If my MP or Pastor that I look up to, appears overweight or obese and is content with it; or if my favourite actor/actress is successful with their 'big frame' – then may be it is 'normal'.

Most pastors inspire their congregation to aspire for good things in life, and some cite their achievements as a source of inspiration. These 'vessels of the Lord' hardly lose sight of the fact that they are role models, but they undermine this powerful status by glorifying their huge frame in their pulpits as part of their success stories.

It is inevitable that the public become drawn to their 'role models' especially when they relate to a common factor, in this case being obese or overweight. What could be powerful is if the role model seems to be doing something to reverse this common factor. Unfortunately, hardly do we see any of these leaders promoting healthy lifestyle – instead they prefer to parade on our televisions with their potbellies, round cheeks, hidden/lost necks etc all to show off their wealth.

One does not have to look far to appreciate the perceived acceptance and glorification of Obesity. A cousin of mine was advised by her fiancé to 'pile up some weight' before their wedding ceremony. To her fiancé, a 'woman must have enough body' and that would be more presentable to his family.

Whiles it would be unacceptable for me to chastise people who are Obese/ Overweight, I have no sympathy for those who make deliberate efforts to be chubby for the wrong reasons. I have been in the business of weight loss/ gain long enough to appreciate that it goes beyond health. People make such decisions for all sorts of reasons, and of course these decisions are theirs to make. Scrutinising these decisions should equally be acceptable to society.

To decide to be fat/ chubby/ flabby/ chunky/ plump/ to show off one's success is as absurd as a footballer who celebrates his goal by scoring an own goal. How could increasing one's risk of developing Diabetes, Heart Diseases, Strokes, certain types of Cancers and premature death be a show off?

Our biggest challenge as a nation lies in our failure to recognise Obesity as a disease, and like any other disease should be prevented as much as possible. In Ghana and many middle-income countries, it is not uncommon to find Obesity and malnutrition existing in the same community and even the same household.

Whereas we are good at identifying malnutrition as a medical condition that requires expert input, Obesity hardly gets attention – because it has become acceptable to the extent that people endeavour to be obese to emulate their 'role models'. In my opinion, aspiring to be as chubby as one's role model is as ludicrous as attempting to go blind because one loves Steve Wonder.

The public's interest in our politicians, religious leaders, businessmen, actors and actresses should be encouraged. After all, these are successful individuals in our society that people can aspire to be like. However, they should not be perceived as a guide to living our lives. We should tap to their professional minds and achievements, rather than their superficial chubbiness.

Weight related decisions are better made with particular consideration to our health. People who are less endowed to make such decisions should be guided accordingly. These people should be encouraged to seek appropriate help and supported to make the necessary lifestyle and dietary changes.

Our leaders and 'celebrities' should embrace healthy lifestyle principles and hopefully transfer these to their followers/ 'fans'. They should seek help themselves, and if possible go public about their intentions to seek help and their progress with such help in order to stimulate the minds of their followers/ 'fans' to follow suit. It can not be an acceptable excuse that the responsibilities associated with being a leader or 'celebrity', thwart one's principles of eating healthily and doing more exercise. Indeed, these principles should rather be deepened when one achieves such status – for the benefit of the larger society.

Far from my principles that I would be seen to label blames, but I believe our leaders and 'role models' have a major responsibility and a role to play in helping educate the public about their weight in particular and health in general. Obesity should form part of the political discourse, Sunday sermons, radio discussions and education forums. This would help bring the menace to the attention of the Ghanaian public and hopefully disabuse the minds of society from the perception that Obesity is ok.

Many industrialised countries have higher levels of Obesity than Ghana, but most of them are tackling the problem with their entire armoury. Indeed, Obesity and its related conditions are at the centre stage of government policies in many countries. Since we are not that fortunate to have their resources to deal with the problem, I guess we are better off seeking to prevent the problem as much as possible.

Matching trends in our lifestyle, love for technology, attitudes etc dictates that we are likely to follow the trend of Obesity in industrialised countries – if we do not make concrete efforts to prevent it. We might not possess the financial resources to deal effectively with Obesity, but I believe we are endowed with the knowledge and influence from our leaders to help reverse the increase.

My concern is not so much about how reckless our leaders are becoming with their weight and health, but more so about the extent to which the public can go in 'following the footsteps' of these leaders. Their influence continues to be so powerful that, if channelled rightly, this country stands to benefit enormously. It is my ultimate hope that few of them have just chanced on this piece, and are ready to 'do something about it' – as they often tell us.