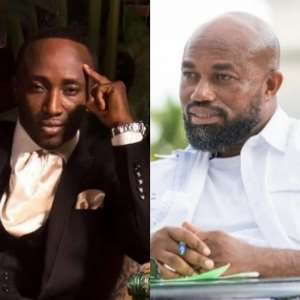 George Quaye is a million dollar richer as he has landed a contract from McDan that is worth $2 million.

The Ghanaian millionaire praised the versatile media personality who also doubles as an actor and a director for achieving more in life after making a name for himself.

McDan
“I’m here with Aboagye. Aboagye you saw in ‘Taxi Driver’ just won a contract from me – about two million dollars.

“You saw him in ‘Taxi Driver’ like he was joking [in ‘Taxi Driver] but Aboagye had a purpose. Today, he is sitting here in a suit. Everybody has something special in him,” McDan noted at the event.

During his address during the programme, ghanaweb.com reported him to have also encouraged the youth to crave distinctiveness by taking calculated steps in life.

Although Mr McKorley has spoken highly of George Quaye's two-million-dollar contract with his company, it is currently unknown to the public the kind of contract he won and how he tends to use the money.

Apart from his career in the media and showbiz space, George Quaye is also the Chief Executive Officer (CEO) for ImageBureau, an event organising company which organised the Asafotufiam Concert in Ada.

The concert that saw Shatta Wale, Wendy Shay and other acts performing financed by McDan whose salt mining company has taken over The Songor Lagoon in Ada, to mine its salt.

More from Industry News
ModernGhana Links
Why use my song to promote your show, I will sue you — Okese1 threatens Global Citizens festival organizers
The gold in filmmaking more than the mining sector, ours is inexhaustible - David Dontoh
I will play my part to win Ghana a Grammy Award — Black Sherif
TOP STORIES