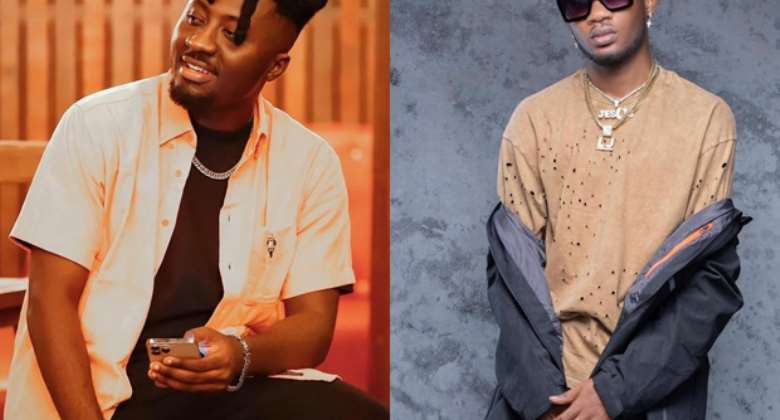 Rappers Amerado and Lyrical Joe have been taking shots at each other in a new rap battle between them.

The two rappers seek to prove which of them is a better rapper and music followers are left with no choice but to support the battle.

So far they have each released four songs, all aimed at running the other down. The beef started after Amerado was crowned Best Rapper at the 5th edition of the 3Music Awards months ago. Lyrical Joe released a song to express his displeasure at the organisers, stressing that even Amerado knows he did not deserve the award.

Although some expected Amerado to reply at the time, he refused until now.

According to him, he was busy with his album, the reason he did not reply to the diss track.

He is currently available and ready for war.

Amerado released ‘Kyibom’, ‘Ponky Joe’, ‘Sin No More and ‘Lyrical Josephine so far. All the songs are targeted at Lyrical Joe who responded with ‘Baboon’, ‘Mute’, ‘Kwabena Numbers’ and ‘Abaduaba Ameliar’.

Music fans are currently divided as to who is the best between the two rappers. While some support Amerado, others say Lyrical Joe has won their hearts. Industry stakeholders like KOD, Hammer and Nana Aba Anamoah have given their verdicts on the battle. “This Lyrical Joe guy is lethal,” Nana Aba tweeted.

Hammer wrote, “But boys dey rap oo… so far I'm team @Amerado_Burner tho… until further notice. Lol Occasional battles in rap is definitely healthy as long as no one hits below the belt. Keep families out guys.#fortheculture.”

“I’m happy our boys are still working hard and killing it. @amerado_burner never stress wai, your time’s cooking. You’re truly dope in your own way. Do you, be you, Be humble and give credit when/where it’s due. Let’s meet on the radio soon,” KOD also wrote.

It is anticipated that the two rappers have more releases coming during the weekend because it does not look any of them is ready to back down for the other.

More from General News
ModernGhana Links
Akufo-Addo’s government is unprecedented, not even Nkrumah’s can be compared — Agya Koo
Pharoah Sanders dies at 81
How did I fall for Dr. UN’s cheap awards? — Berla Mundi can't believe she was scammed
TOP STORIES

Boos at Akufo-Addo: Someone failed and caused this monumenta...
19 minutes ago