I don't want to die, I want to be alive — Nigerian actress Chacha Eke announces a break from 9-year-old marriage 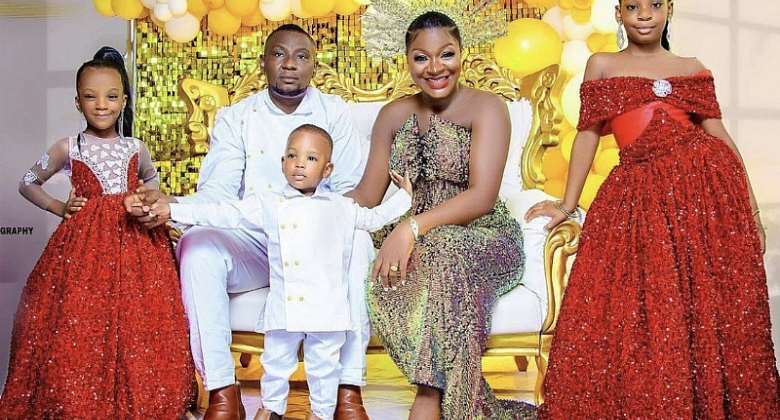 Nigerian actress, Chacha Eke Faani, has announced a break from her nine years old marriage with her husband, Mr. Austin Faani after having four children.

In a post on her Instagram page on Monday, June 27, 2022, sighted by Modernghana News, she noted that she is never willing to die early because many have died in an abusive marriage after pretending all is well.

She further apologized for pretending to be well in the marriage even when she knew she was suffering.

“Many have died pretending all is well whilst wishing, hoping and praying for a better tomorrow.

"I don't want to "die" or go inexplicably "missing".

"I sincerely and publicly apologize for living a lie these past years. True to random speculations, there has been trouble in my "perceived paradise.

“For the 2nd time in 2years, I am here again on social media boldly declaring that I am done with my marriage. My long overdue/relentless stance on this is of course no news to Austin Faani, the doctors and my parents.

“If push comes to shove & suddenly I am incommunicado; my lawyers, the welfare department and the Nigerian police force have my testimonials in recorded video clips/ statements set for public release on all social media apps and national newspapers,” her post reads.

Though her post did not give details, it is clear from the content that she has been suffering from depression as a result of domestic violence or emotional abuse.

This is recorded as the second public announcement of intended divorce by the actress since the 2020 similar statement.

She blamed it on bipolar disorder a few days after the first incident in 2020.

“Several psychiatrists have come to assess me mentally, and I have been diagnosed with bipolar disorder. Bipolar is real. Here in Africa, we tend to not know about it due to ignoring or overlooking it. "I cannot tell you all how I have been feeling in these tiny videos I have been making, but I will, however, show you in motion pictures soon," she said at that time.

Now, she is here calling for a divorce.

The couple, who have been married for nearly nine years, welcomed their fourth child in 2021.

Latest Photo Reports
Catch up with all the political quotes from our politicians.
Advertise here
More from Exclusive News
ModernGhana Links
I wrote the ‘fed up’ song on my 10:30 album from my past relationship experience — MzVee
[VIDEO] I've money so I won't get married, I'll just buy a man and use him like a puppy — Popular Nigerian Actress
I will marry 30 women, God is polygamous — Prophet Ajagurajah
TOP STORIES

'My Ga, Fante, Ewe and Northern brothers when was the last t...
12 minutes ago