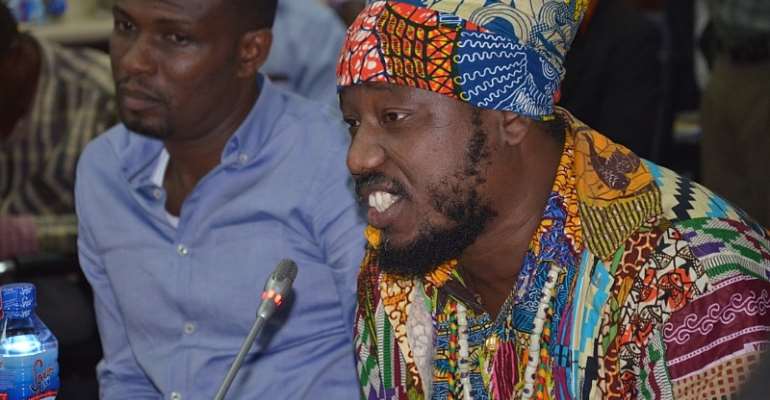 Shatta Wale, sporting a pilot gear, accused Blakk Rasta of being an unprofessional weed smoker who failed to defend weed and Rasta at the parliament house in 2015 when he was hauled there for remarks he made on the radio relating to weed legalization in Ghana.

Checks by Modern Ghana.Com as to the true cause of this remotely referenced a tweet three days ago from Blakk Rasta which read, "Miming is a mockery to professional music... #TimbuktuByRoad". Even though the seemingly harmless tweet did not mention any name, Shatta Wale believed it referred to him as he was seen miming at the recently ended AFRO NATION Ghana Festival attended by tens of thousands.

Blakk Rasta in a response to Shatta sent another seeming harmless tweet to him yesterday reading, "Happy new year to @shattawalegh. My new acclaimed #TimbuktuByRoad album is ready for delivery to you when you ready. I am also performing LIVE not MIME tonite at Ashaiman and I am inviting you, bro. More love.. #TimbuktuByRoad".

Asked of he will engage Shatta Wale in a beef, Blakk Rasta laughed and waved that off. "I am an artist who brought Obama to Ghana without the need for beefs. I was invited by great presidents such as Robert Mugabe, Mahmoud Abass of Palestine, Present Grange of Guyana, etc to dinner and performances without having to beef any one. I rose like a column of mercury in a thermometer by dint of calculated consciousness and passionate wars on corruption and tomfoolery," Blakk Rasta smiled."

Shatta is my boy and I refuse to fight a guy I helped raise. I reunited him with his uncle who he fell out with and got him a much-needed accommodation which he appreciated in 2011. I introduced him and Stonebwoy to live band music which they both still appreciate.

In fact, Shatta even made a song called My Time or My Sign... I can't remember exactly the title.. to thank me for the live band I introduced him to years back. So you see, I can't be seen as fighting my sons on. In fact, if I was a pastor, Wale and Stonebwoy would be my spiritual sons and be paying tithe to me... Hahahaaaaa. I have Timbuktu By Road album to promote and am an international tour later in the year. Just come and see why when it comes to real, live band music, I have no classmate."

It is not clear if Shatta Wale will fire again as it's habitual of him but it looks like it is a war between authentic live band music and cold dead-band music.