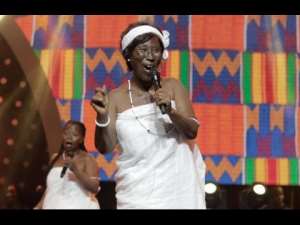 Veteran highlife musician Naa Amanua Dodoo has noted that highlife in her days was powerful in comparison with recent times.

According to her, there have been certain changes to the genre in recent times which seems and sounds good but still stands to the fact that highlife in her era was very powerful.

Naa Amanua Dodoo said she will on any day rate her days over recent times.

“There has being a lot of changes in the genre. Some of the recent artists have added a lot of creative techniques to the genre which makes it sound well but does not march what was done in my turn,” she said.

The ‘Oblayoo ko’ singer told JoyNews at her residence at Labadi on Sunday.

When asked where she has been and how active she has been over the years, she stated, “I perform occasionally at certain events, the last time I performed with Dela Hayes during her 10 years anniversary celebration.”

Naa Amanua Dodoo admitted that she is open to collaborations with any of the new acts who would approach her since she is still active.

However, she could not hide her bias to work with upcoming females artistes.