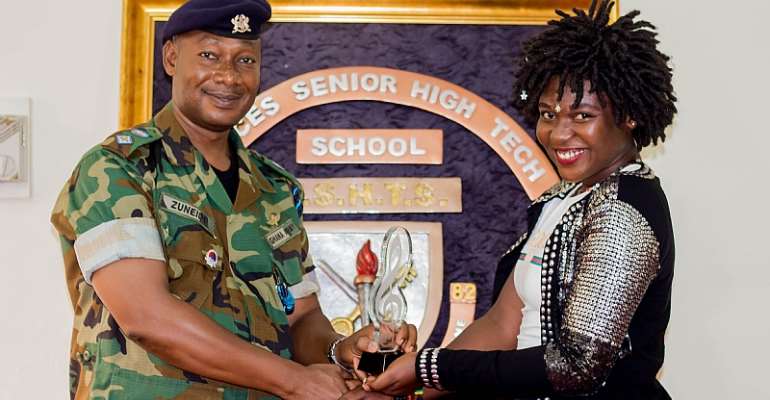 A school known for it's high excellence in learning and maintaining discipline in students beautifully located inside the Burma camp with the supervision of the military never hesitated to welcome their own student and the multiple award-winning songstress Euni Melo as she officially presented her 2 awards to the entire student population in an assembly on Thursday 3rd October 2019.

This was accompanied by her strong and juicy performance.

It all begun when Euni Melo and her management paid a courtesy call to the school authorities requesting to officially present her honors to the school she studies in.

The diva who grabbed awards as the best new act in Gome Awards (Ga Dangbe) and Dancehall song at the Emerging music awards, was excited to involve her school since that was where her talents were fully discovered and nurtured.

The headmaster was happy and stated how proud he and the school is of Euni Melo and prayed she win more honors and soar even higher, the assistant headmaster also seized the opportunity to declare a day within the school calendar as a Euni Melo Entertainment day, a day to allow her to display her full talent to the school

Euni Melo currently has 10 released singles with 3 official videos and 2 awards under her sleeves just 8 months into her professional music career.

Nothing less is expected from the PPP records artiste who is gradually gathering momentum into hitting mainstream fully.

Watch video from the event below

PHOTOS: Ghanaians hit the streets of Accra for #FixTheCountr...
1 hour ago