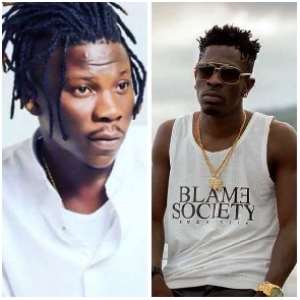 Climaxing the Kplejoo festival of the people of Nungua this year would be the biggest outdoor music fiesta ever to be staged in Nungua and its environs dubbed, July in Nungua, headlined by Shatta Wale, Stonebwoy and Medikal.

July in Nungua has now been anchored to be an annual event designed to inject some extra splendor and spectacle that takes Kplejoo beyond the festival it’s always been known to be a weekend-long event that brings together artisans, businesses, celebrities and people from all over the world.

Other top shots featuring on July 14th are Strongman, Nii Funny and Wisa, Article Wan and Patapaa and a lot more!

Once every year in July the chiefs and people of Nungua celebrate the Kplejoo festival – a forerunner to the annual Homowo festival celebrated by other Ga lineages in the Greater Accra Region.

It is a song- and drum-based celebration which sees the people of the land sing special songs and perform one special activity called “Obeneshimo” which signifies the journey of the Ga people from Israel to their present settlements.

Over the years, the culturally and historically rich festival has been celebrated somewhat on the quiet, but all that is about to change as the Chiefs and people of Nungua gear up to make Kplejoo a National Celebration with immense tourism and creative arts benefits starting July 2019!

Slated for this weekend starting Friday July 12th to Sunday July 14th, July in Nungua will see activities including football matches between a special Nungua select side vs. The National Under 21 football team, art and business exhibition, a games arcade and more.

A statement read by a member of the entourage of His Royal Highness Nobel King (Prof.) Odaifio Welentsi III, the Paramount Chief of the Nungua Traditional Area stated, “Your letter has received warm reception. I have been further directed by the King to inform you that he is a lover of music and also a chorister. Therefore, in that regard, you have his blessing and permission to carry out the proposed plan”,