Husbands Salaries Should Be Paid To Their Wives-Evangelist Isaac Aning 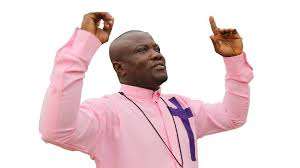 Popular Evangelist and musician, Isaac Aning has opined that husbands salaries should be paid into the bank accounts of their wives.

According to him, his wife has been receiving his salary since they got married and it’s such a good thing to do as husband. He gladly accepts any amount his wife hands to him.

The “Bobolebobo hitmaker added that men should follow suit because women are better home keepers.

“Men should even change their salary name into their wive’s names so that at the end of the month, the women will go for the money and give some to the men”, he said.

“For me, after every show, I give all the money I get to my wife to count and keep it, she gives me some if I need it.”

He further stated that men should follow suit because women are better home keepers.

“Women are more experienced in taking care of the family than men.They also knows the needs of the children” he added.