5 Ghanaian Artists That Would Be Great For Coachella 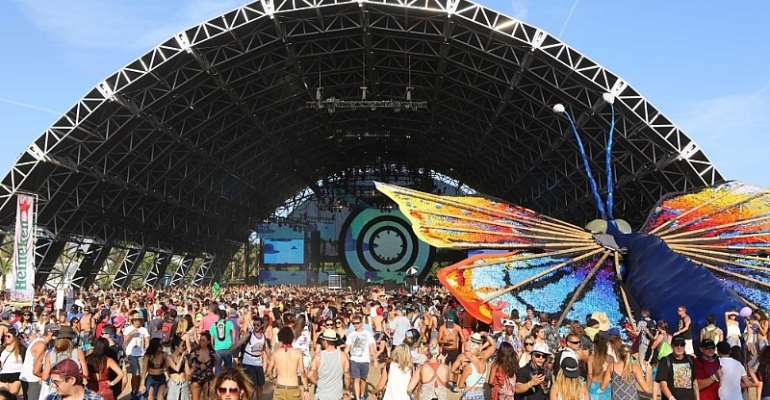 After experiencing my first Coachella festival, I cannot help but wish I saw a Ghanaian on stage alongside Mr Eazi and Burna Boy. Indeed, that was one of the frequently asked questions on social media during my coverage of the Coachella Valley Music and Arts Festival held at the Empire Polo Club in Indio, California.

So why wasn’t there any Ghanaian on the lineup, and how are artists even selected for Coachella, which is considered one of the most prestigious US music festivals? To play at Coachella is major validation and one of the best ways to break through to a huge audience, with a festival crowd of over 150,000 and global live streaming of sets to millions of viewers!

I did some digging around and found out that although the process of getting booked for Coachella may be evasive, it is not impossible. It’s not as hard or as mysterious to play at such a major festival as it might seem, but it definitely requires hard work, commitment, and even more importantly… a strategy!

What is so special about Coachella? My weekend 2 experience!!

Part of the strategy starts with having an electronic press kit (EPK), which contains your branded professional photos, recordings, live performance videos, artist bio, and any press coverage. Today, with the impact of social media, a lot of artists take this for granted, and I don’t blame them. If you manage your social media well enough though, it could very well be your walking EPK!

It is also important to associate yourself with third-party companies that will expose you to countless playing opportunities, as well as licensing, contests, airplay and other exposure. Applying for events such as SXSW, which is one of the most recognized festivals for up-and-coming artists, can be helpful too.

What a wow! My troubled journey to Coachella

To catch the eye of festivals like Coachella, you need play smaller festivals like local festivals and non-profit festivals, to build your resume and fan base, while proving you can perform for crowds. Getting a videographer to get professional videos of your performances to add to your EPK is highly recommended. Based on this premise, I am sure a few Ghanaian artists are coming to mind already, but we will get to that a little later.

With the above, an artist can legitimately have a shot at getting into Coachella, but the truth is that it is not easy to do it on your own without a booking agency. These agencies already have connections with the festival organizers, and serve as a pre-screened approval for the artists. A booking agency should only get paid if the artist is selected for such a major festival with booking fees ranging from 10-20% of the gig revenue.

The organizers of Coachella, Goldenvoice, select the artists for the festival. They reach out to booking agencies probing for what talent will be available, the agencies usually submit lists of artists on their rosters that will be available/interested, and Coachella narrows it down from there until it’s finally in place and the contracts have been agreed upon by the artist/agent and Goldenvoice.

The whole process lasts the entire year, and some artists get confirmed long in advance while others aren’t locked up until right before the announcement. In addition to agent pitches and artists discovered online, the lineup is culled from acts booked by Goldenvoice for their other 1,800 shows each year.

According to the Los Angeles Times, booking fees for most artists playing at the Coachella festival allegedly start at $15,000 and extend into the “high six figures.” Beyoncé’s 2018 performances and Ariana Grande’s 2019 performances reportedly earned each of them $8 million.

So yes, online buzz is a good start, but not just any kind of buzz. It must be appealing and strategic. Already we have a lot of Ghanaian artists including FOKN Bois (Wanlov and M3nsa), Rocky Dawuni, M.anifest, Efya, Stonebwoy, Wiyaala, Atongo, Ambolley, King Ayisoba and others playing at international gigs (not concerts put together by Ghanaians or Africans abroad).

Sarkodie fits the bill in terms of his online presence and professional branding, and as a rapper, he has one of the best stagecraft in Ghana. But I also feel that you have to know a Sarkodie song already before you enjoy his performance, and for a festival like Coachella, where the audience are largely American and global, his music may not immediately resonate with them.

So who makes up my list of 5 Ghanaian artists that would be great for Coachella?

Singer/songwriter, Efya for many years was the standout female performer in Ghana, after her appearance on a singing competition reality TV show. Having won the Ghana Music Awards nod for Best Female Vocal Performance in succession from 2011 to 2014, Efya is loved for unique and strong vocal dexterity, both as a recording artist and a performer.

Her debut mixtape T.I.N.T. was released in 2013, comprising songs that were released between 2011 and 2013, supported by two new hit singles “Getaway” and “Best In Me”. Efya then released her long-awaited debut studio album ‘Janesis’ in 2016. “Forgetting Me” the album’s lead single, was a smash hit as well.

Efya’s vocals have been heard on many hit songs including ‘Skin Tight’ with Mr Eazi, ‘Daddy Yo’ with Wizkid among others. Her award wins and nominations include Black Entertainment Film Fashion Television & Arts Awards (BEFFTA), All Africa Music Awards (AFRIMA), MTV Africa Music Award (MAMA), World Music Awards and more.

Efya’s live performances are amongst the most-loved in Africa. She has performed on several international stages such as Gidi Culture Festival (Gidifest) and SXSW. She has headlined the annual ‘Girl Talk’ concert since 2015 and improved year after year.

Wiyaala is an Afro pop singer-songwriter who sings in her native language Sissala and Waale dialects and English, often combining all three languages within her songs.

Like her name, which means ‘the doer’ in the Sissala dialect, Wiyaala has proven that anything she sets her mind to, she can do it. She first attained public renown with her single “Make Me Dance” and her androgynous image, after winning a singing contest reality TV show with her group, Black N Peach. She established a solo career in 2013 with the hit single “Rock My Body”, which won her two awards at the All Africa Music Awards (AFRIMA).

Her music style has been described as Afro-pop or Afro-rock with elements of tribal folk music. She released her official debut album in 2015, eponymously titled “Wiyaala”. Her single “Go Go Black Stars…Goal!” featuring tribal drums and stadium choruses, was picked up as the unofficial hymn of the national football team of Ghana for the 2014 World Cup.

In 2016, Wiyaala successfully established her Djimba World Festival, an annual music festival to shine the light on talent from the Upper West Region. It’s counter-intuitive initiatives like these that are contributing to Wiyaala’s ever-growing worldwide popularity. It was no surprise when the BBC named Wiyaala as one of their “Celebrated African Women” of 2018.

Samini may not have a lot of experience with international festivals (he has been announced for Upstream Music Festival (Seattle) and Bob Marley Fest (Atlanta) in the past, but he never got to make these appearances), but remains one of Ghana’s most consummate performers. With strong vocals, and masterful ability to do reggae, afrobeats, dancehall and more, he would surely move any crowd at Coachella.

Samini (formerly known as Batman) is known for his melodious mixture of highlife, dancehall, reggae and hip-hop. He terms his brand of music as the “African dancehall”.

He has released seven very successful studio albums, after his debut album, ‘Dankwasere’, was released in 2004. The debut album topped music charts for weeks and won two awards at the Ghana Music Awards.

Samini launched his annual Saminifest Concert in 2014 and has been consistent with it till date.

If I were to choose a Ghanaian rapper who would fit into Coachella, it would be M.anifest, because his style of rap and his brand would make festivalgoers stop and listen! The award-winning artist combines traditional African sounds with hip hop sensibilities like no other.

M.anifest released his first solo album, ‘Manifestations’, which earned him Songwriter of the year Honors in the City Pages as well as top five albums of the year recognition in the Star Tribune.

He joined Africa Express in 2010 to play gigs in France and Spain, which caught the attention of Africa Express co-founder Damon Albarn, who thereafter invited M.anifest to be a collaborator on Rocket Juice & the Moon in 2011.

In 2011, he released his sophomore album ‘Immigrant Chronicles: Coming to America’ to mark a decade of his life in the U.S. and the beginning of his transition back to Ghana and indeed Africa. The album included the hit singles “Suffer”, “Asa” and “Blue (Chale What Dey Happen)”.

M.anifest represented Africa at the 2017 Cannes International Music Festival and took part in the Midem Artist Accelerator 360 programme and won the Midem Best Artist nod. He has also performed at the Swizz festival Musiques en été’ in Geneva, the Harare International Festival Of The Arts, Lake of Stars Glasgow, and the Commonwealth Games’ ‘Festival 2018’. He also has an annual festival called ‘Manifestations’ in Ghana.

Perhaps Ghana’s current biggest commercial music export, afropop, dancehall and reggae artist, Stonebwoy continues to excel in many diverse ways. He is a consummate recording and performing artist, known to excite crowds with his vocals and energy.

In 2015, Stonebwoy won the BET Award for Best International Act: Africa and in 2018 he was nominated again for it. He has also been nominated for MTV Africa Music Award in once shortlisted for MTV Europe Music Awards.

In 2019, Stonebwoy was part of the Africa To The World 3-day showcase at SXSW in Austin, Texas. He won the nod for ‘Favourite African Star’ at the at the 2019 Nickelodeon Kids’ Choice, and has since collaborated with more international acts including Beenieman for his current single, ‘Shuga’. Stonebwoy has two annual concerts in Ghana ‘ATTW’ a free concert and ‘Bhim Concert’, a paid to attend the show.

With the world now paying attention to African music, hopefully, any of these 5 and indeed any other Ghanaian musician would perform on the stage of a grand international music festival such as Coachella in the very near future.

Why are you refusing to obey the orders of the Court ? — Jus...
37 minutes ago